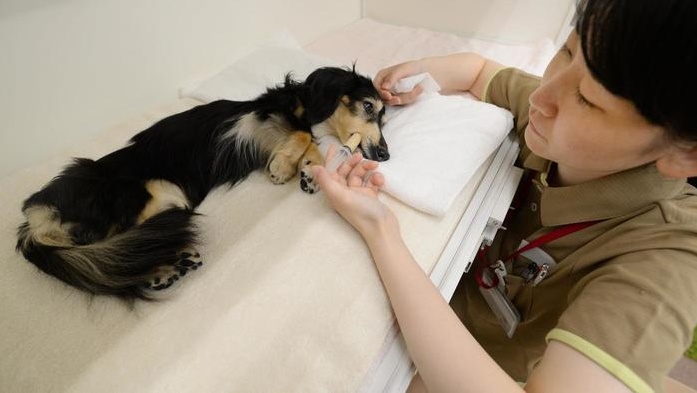 I know that sounds terrible but I get so frustrated when speaking to dog owners who will not do the right thing when their dog is old and in pain. You see them out walking, urging Fido to 'C'mon, keep up', as Fido struggles along ten yards behind, his tongue lolling from his mouth, his stiff old legs lacking the flexibility they used to have. They seem to be forgetting the old 'dog years' rule. If old Fido has been around for fifteen years or so, he's an OLD DOG. Give him a break. I'll bet you can't jog around the block like a spring chicken when you are a hundred years old.

But worse than this is when I hear people telling me stories of the trouble old Fido has just lying down; how he turns and shuffles as he prepares for splashdown. And the little whimpers and yelps he emits when he summons up the energy to get up from a lying position? Those are just the bits you hear. Do you think that all the time he isn't making a sound that everything is hunky dory? If he's in pain getting up or lying down or negotiating stairs that he used to bound up and down, then there's a good chance he's in at least some discomfort just laying still, especially on a hard floor.

I recently heard from a friend that his dog that had gone almost completely blind and was possibly suffering some kind of canine dementia (the owners diagnosis), and those ailments combined with the arthritis and skin problems meant that this pooch was in a lot of discomfort whether he was moving or lying down. The owner had only the best intentions. He loved and cared for his dog, carrying him when he could, bathing him with special lotions and potions etc, but could not bring himself to do the kindest possible thing and have him put down. Whenever this suggestion was put to him he would get very defensive. "I've had him since he was a puppy." He would say. "I couldn't bear to lose him."

Well never mind what you could or couldn't bear. Think about what poor Fido has to bear every day, simply because you don't want to lose him.

Of course I am not suggesting for a moment that you ship old Fido out at the first sign of slowing down. On the contrary; there are some great products out there today that can be of enormous benefit to a dog showing signs of arthritis or the like. But when even these remedies no longer help him, let him go. He's loved you as long as he's known you. Return the compliment and let him rest in peace.

Accepting Euthanasia for Your Dog

Facing the Possibility of Pet Loss

Dogs, no matter how strong they may seem, are actually very vulnerable creatures because of the several diseases that can affect them. A lot of canine diseases can lead to death of the animal or, if not, can mar the dog for life. For example, a cancer in your dog can still be treated by, say, chemotherapy, but the procedure can practically take the life and energy out of the dog completely. There are also diseases that can still be cured, but are causing a huge amount of pain to your dog that even death seemed more favorable. In similar cases, your dog's life really is in your hands, and so are its comfort and its suffering as well. When dogs get sick with severe diseases, their owners are suddenly faced with the difficult decision concerning euthanasia or putting a dog to sleep.

When Euthanasia Would Be the Better Option

Some dog owners rule out euthanasia, thinking that it is such a cruel thing to do to a pet that has been loyal and loving for several years. However, there are cases that euthanasia would be the better option. Since you are the only person who knows your pet very well, you are the only one who could possibly tell if your dog is in too much suffering already. As a guide, consider euthanasia when the very essence of your dog's life has diminished, and even its daily survival is marred with visits to the vet, painful medications, and difficulty in getting up or moving around. Check for the following signs to see whether euthanasia would be the better option for your pet. Your pet should be able to get sleep, to breathe easily, and to move without intense pain. Your pet also needs a continuous bowel and urine movement, and should still have enough strength to care about what's going on around it. If the disease is not so severe, or does not cause much pain, don't consider euthanasia yet. But if your dog is suffering from severe pain, and chances of saving it are pretty slim already despite the soaring medical costs, then you may want to relieve your dog of its suffering earlier.

How to Handle Post-Euthanasia Grief

The grief that follows a euthanasia procedure may be one coupled with feelings of guilt and regret, in addition to the painful feeling of losing a pet to a disease that you could have prevented in the first place. Although euthanasia is also referred to as putting a dog down or putting a dog to sleep, which implies its painless nature, some dog owners feel as if they betrayed their pets and caused them pain. The best way to balance your emotions and relieve the guilty feeling after a euthanasia procedure is to provide a fitting burial place for your beloved pet. It will help you feel that you've done your pet the justice it deserves by burying it properly. You can bury your beloved companion complete with a casket in a cemetery, or have it cremated and take the ashes home with you. After the burial, give yourself time to grieve and cry for the loss of your pet.