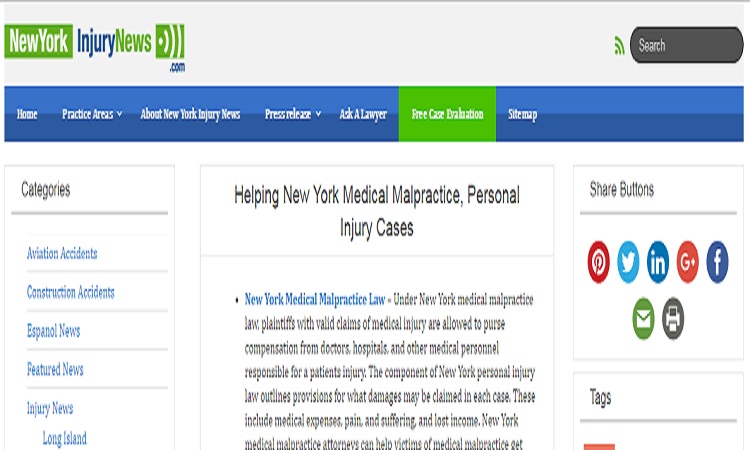 New York medical malpractice law is a component of New York personal injury law that allows plaintiffs to file civil actions when they have been injured by medical negligence. In accordance with the law, when health care providers breach their duty to adhere to delivering an acceptable standard of care, they may be held liable for medical expenses and other damages incurred in the event that a patient becomes injured.

The New York medical malpractice statute of limitations stipulates that actions must be filed within 30 months of the date of the injurious act or omission. For specific types of injury, other conditions may apply. A New York medical malpractice lawyer can provide help to patients who have questions about their legal options after they have sustained a medical injury.

Consulting with New York medical malpractice attorneys is in many cases in the best interest of injured patients due to the challenges they face in attempting to purse fair compensation for claims alone. Without having adequate legal knowledge or financial resources to challenge the legal teams of hospitals or other at fault medical care providers, this can prove difficult.

Surgical Errors
In seeking or requiring surgery, patients are typically made aware of risks that may be involved. Surgical errors; however, are not expected to reasonably be a part of any surgical procedure. Patients entrust their care to surgeons with the expectation that they are competent in their ability to perform surgery without committing errors. Sadly, for many patients; however, surgical errors in the operating room lead to their being seriously injured and forced to endure unwarranted pain and suffering.

Most surgical error stories are shocking. The most surprising element is seeing in the aftermath that in a number of these cases, the error could have been avoided if simple precautions were taken. From poor planning prior to a surgery to poor aftercare, these types of medical mistakes lead to the injury of thousands of patients annually. According to some surgical error statistics, the rate of fatal injury involving cases of wrong site surgery is considerable, making it high on the list of common errors of this kind.

When it comes to surgical errors and safeguards, most surgical facilities do well in preventing surgical errors with implemented practices. Those that fail in this area may be subjected to medical malpractice claims.

Failure to Diagnose
A failure to diagnose a serious condition can adversely affect a patient’s prognosis. Minor conditions may become serious without being properly treated in beginning stages and serious conditions can become fatal. With diseases like breast cancer, where early detection can substantially increase a patient survival rates, a oversight by medical professionals who fail to administer the right tests or read test results properly can literally become a life or death matter.

When a patient is not provided the correct diagnosis after seeking medical care for a specific ailment, they may have grounds for bringing forth a legal complaint. Filing a failure to diagnose lawsuit affords patients the opportunity to seek compensation for damages incurred as a result of their specific failure to diagnose medical malpractice issue. Patients, who have been injured by receiving a late or inaccurate medical diagnosis, can consult with a personal injury lawyer about their legal options.

Birth Injuries
Birth injuries are stated to occur in less than 10 out of every 1,000 births. Various types of birth injuries can result from complications related to the health of the mother; however, there are cases where birth trauma is the result of a preventable medical mistake. When doctors and nurses fail to adhere to acceptable standards of care in using their specialized training to ensure a baby’s delivery is as healthy as possible, they may be deemed liable for any birth injuries to mother and child that result.

Birth injury lawyers are available to help those affected by a birth injury linked to medical malpractice. Common issues that may be supported by a malpractice action include: a failure to anticipate that a complication may arise due to the size of the baby or health condition of the mother, a failure to respond properly to immediate issues such as bleeding or fetal distress, and not administering medications correctly before or during labor.

For patients who have been injured due to a medical practitioner’s negligence in prescribing or administering a drug, or a pharmaceutical error, legal help is available for seeking compensation for related damages. Medical expenses, pain and suffering, and other damages may be sought in these cases. Medical malpractice claims often serve as motivation for enforcing policies that prevent repetitive failures to adhere to an acceptable standard of care. By contacting a medical malpractice lawyer, patients can get information about their legal options following a medication error related injury.

Anaesthesia Errors
Anaesthesia errors are among the most common bases of medical malpractice claims in the United States, some anaesthesia error statistics suggest. When a patient undergoes surgery and is placed under anaesthesia, there are inherent risks involved, even when precautions are taken for avoiding common anaesthesia errors. However, errors made by an anaesthesiologist due to negligence are not included on the list of possible adverse outcomes patients should be asked to anticipate.

Anaesthesia mistakes can lead to a range of health complications that affected patients have to deal with long term. Among the most commonly reported anaesthesiology errors are the delivery of an overdose of anaesthesia, a delay in delivering anaesthesia, complications from drug interactions, and a failure to monitor patients properly. When an injury occurs as a result of this type of mistake, patients may have grounds to pursue a medical malpractice claim. A number of anaesthesia malpractice claims involve patients suffering birth defects, asphyxia, brain damage, heart attack, stroke, and other health complications that may warrant legal compensation for damages.

Wrongful Death
Wrongful death is a legal term used to describe a person’s life being taken by another party’s negligent or wilful act. In most jurisdictions, surviving family members of wrongful death victims are typically eligible to file a wrongful death lawsuit for the recovery of economic and noneconomic damages they have suffered due to their loss. Which survivors are eligible to file wrongful death cases; however, may vary from state to state.

An attorney who specializes in these types of cases can advise the heirs of a wrongful death victim about their legal options. Those seeking representation for a specific case should research the history of wrongful death settlements obtained by a chosen attorney and other factors prior to making a decision. Individuals who plan to file a claim for compensation should be mindful of the wrongful death statute of limitations in their state.

Hospital Negligence
Hospital negligence encompasses a range of acts of misconduct or omissions by employees who assist in providing care to patients. Hospital liability in some hospital negligence cases may be limited; however, to the conduct of nurses, medical technicians, and others on staff. If doctor negligence is involved, then the doctor may be the one legally responsible for an injury to a patient.

There are several issues that may comprise hospital malpractice including record keeping errors, improper patient hygiene levels, unsanitary conditions, and mistakes in administering medicines. Hospital negligence statistics state that among the most commonly reported mistakes are failure to diagnose and prescription drug negligence.

Hospital negligence lawyers can help patients who have been injured in a hospital environment assess their options for pursing a legal claim for compensation. Whether one has become injured due to a fall, hospital acquired infection, or other issue they may be entitled to compensation from hospitals for medical costs, pain and suffering, and other damages.

About Medical Malpractice
Medical malpractice encompasses a range of problems related to the mistreatment of patients or negligent care administered by health care providers. Examples of medical malpractice include a failure to diagnose, diagnostic errors, performing medical procedures incorrectly, and administering the wrong medication. Medical malpractice lawyers can help patients who have sustained a medical injury as a result of malpractice understands what their legal options are for moving forward.

Each medical malpractice case is different and may require specialized expertise from a legal advocate who has worked on cases where an injury was similar to one’s own. Contacting a New York medical malpractice attorney can be a lifeline for patients who don’t know where to turn. An attorney who specializes in this field can advise patients, or their loved ones in the event of a wrongful death, of their legal rights to compensation. Prior to contacting a medical malpractice lawyer, it is advisable to research top attorneys in New York who specialize in medical malpractice, and review their credentials and list of past cases. This will aid in determining whether a selected attorney is a right match for one’s legal needs.

714
Why You Should Hire Herron Law Firm In Cases Of...

651
How Much Time Does a Disability Claim Take to B...

525
Some psychological problems after a car accident