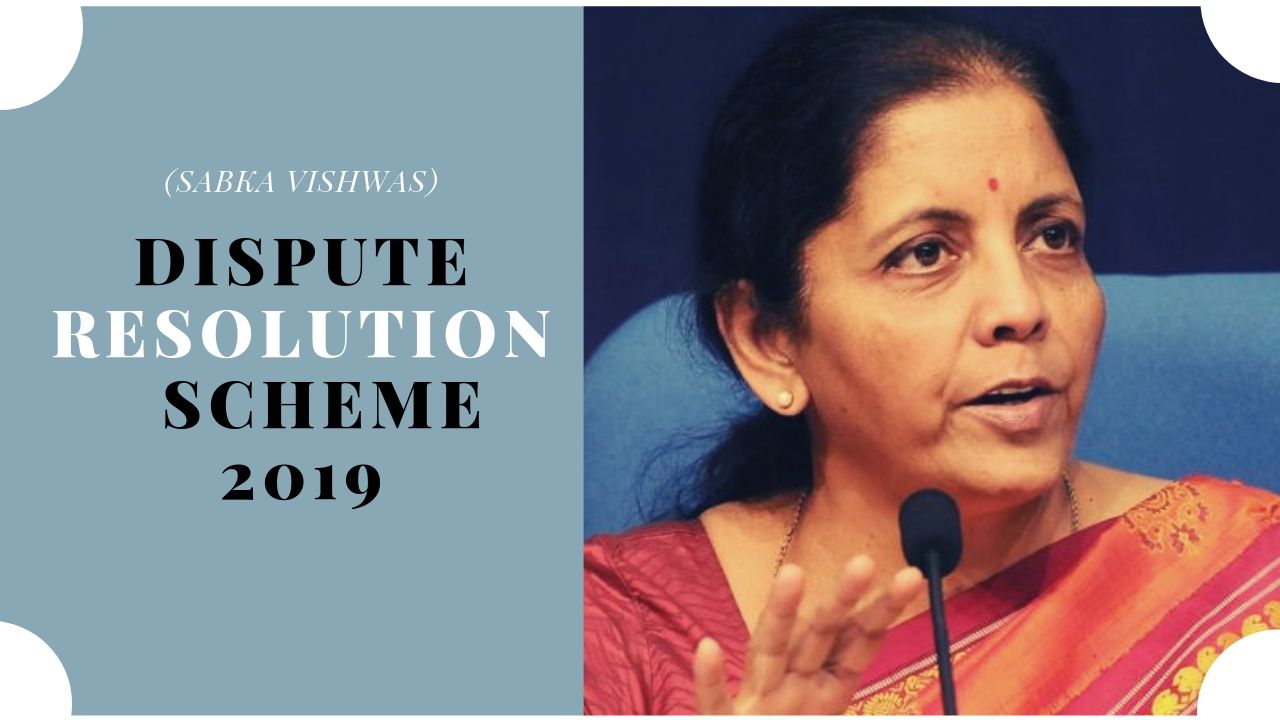 The first lady finance minister of India, Nirmala Sitharaman recently presented the Indian Union Budget on 5th July 2019 along with which she announced a new amnesty scheme i.e. Dispute Resolution (Sabka Vishwas) Scheme 2019. The present blog presents some highlights of this including its Applicability, Eligibility, and Relief.

Dispute Resolution Scheme was introduced along with budget this year. It is introduced to reduce pending litigation and covers various disputes under Service Tax, Central Excise, and some specified Cesses including Swachh Bharat Cess, Education Cess, and Krishi Kalyan Cess, etc.

The finance minister mentioned in her speech that, “An area that concerns me is that we have huge pending litigations from the pre-GST regime. More than Rs 3.75 lakh crore is blocked in litigations in service tax and excise. There is a need to unload this baggage and allow the business to move on.”

This scheme is somehow more powerful and different from other schemes. Sabka Vishwas Scheme waives up to 70% tax and 100% interest and penalty while earlier schemes like the Voluntary Compliance Encouragement Scheme (VCES) waived only on interests and penalty.

Dispute Resolution (Sabka Vishwas) Scheme is only applicable for disputes pending under below given acts:

The lists of other acts covered under the dispute resolution scheme are:

All the individuals are eligible to file the declaration under the Sabka Vishwas Scheme. However, there are some exceptions. Following is the list of exceptions, i.e., the following individuals cannot opt for this Scheme:

The relief is given to people under the cases where the tax dues related to the show cause notice for late fees/penalty includes:

Declared along with union budget this scheme appears to be strong and helpful than other schemes. It is quite well framed but still requires clarifications for some open issues like manner of application start and end date and many more. It aims at solving disputes under Service Tax, Central Excise, and some specified Cesses including Swachh Bharat Cess, Education Cess and Krishi Kalyan Cess, etc. The scheme waives at 100% interest and penalties and 70% of the tax dues offering waiver of the tax itself along with interest, penalty and prosecution. Leave your comments below and let us know would you go for it?

The author is an expert of Income tax-related matters, Click here to know more about him.

PRODUCER COMPANY and Checklist for its Registra...

A Producer Company itself is a unique kind of the corporation registered under the Companies Act, 2013. In legal terms, the Producer Company is a body of agriculturists/ Farmers with the ultimate aim of improving and ...

As per the Income Tax Act, 1961, TDS is defined as tax deducted by the company or any other person making payment if the payment exceeds certain threshold limits.

805
Important Things You Need to Know About E-Filli...

Important Things You Need to Know About E-Filling Income Tax

An Overview on Goods and Services Tax (GST) In India taxation has always been imposed on the trade of goods and services. As per the old taxation system there had been multi-level taxation. That means there was an ...

In case you want to replace QuickBooks to the latest model then visit the QuickBooks File Doctor download page at Intuit internet site. QB record doctor handiest works for united kingdom and US variations of QuickBook...

If you are using paid tax preparation services in Canada, pick the right one!