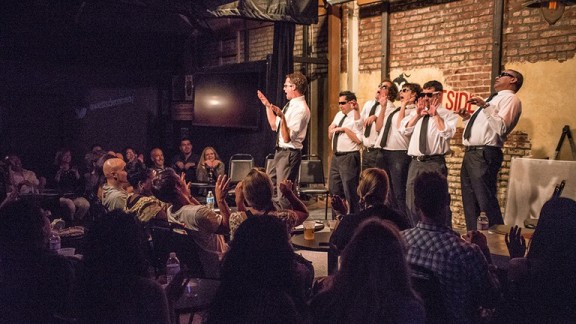 Comedy and humor are two essential components to lead a balanced life. Without comedy, life would be boring and nothing less than a burden. This is the reason people love watching standup comedy shows. Los Angeles is known for being a center of comedy clubs and comedy shows because you will find a variety of talent being showcased. So, when you have so many options, it becomes difficult to choose. For this purpose we have decided to help our readers.

In this article, we have compiled a list of the best comedy shows in Los Angeles so that you get the perfect entertainment without any hassle. We have analyzed hundreds of shows and have picked the top five below.

Currently, the live shows are not being produced due to corona but it is one the classic comedy shows Los Angeles has to offer. Peacock is a live comedy show that you can watch live every Thursday at the Club Tee Gee. It is hosted by Kiran Deol and features an amazing lineup of comics.

Hosted by Jessica Mulder and Landon Hughes, Hollywood Comedy Show & Open Mic is one of the top favorites of people. You can watch it at the Hollywood Hotel in the Route 66 basement bar. So, book your tickets and enjoy some good comedy with drinks.

Dave and Buster’s comedy night is the kind of comedy show everybody looks forward to.  It is a free show hosted by Dave and Buster and you can watch it every Wednesday.

As the name indicates, 10 by 10 is a versatile and interdisciplinary show that has free tickets. Each show contains 10 performers who perform on a variety of things from poetry to comedy. You might find a great poet there. So, don’t miss the chance to watch such a delightful show.

Currently, it has been postponed due to Corona but it will be resumed from November 21, 2020. Magenta Panini is also an entertaining monthly comedy show that you can watch at Harvard Blvd, Los Angeles. It is hosted by Hughes Ransom and features Asif Ali, Debra DiGiovanni, Kyle Ayers, Rosebud Baker, and many more. You can enjoy the Paninis while watching the show and have a good laugh.

All of the above-mentioned comedy shows are some of the best comedy shows in LA. If you are planning to watch a comedy show with your friends and family then do consider one of these. You will certainly love them and have laughter in your life. For more suggestions and information regarding LA comedy shows, visit The Glossy Musings.