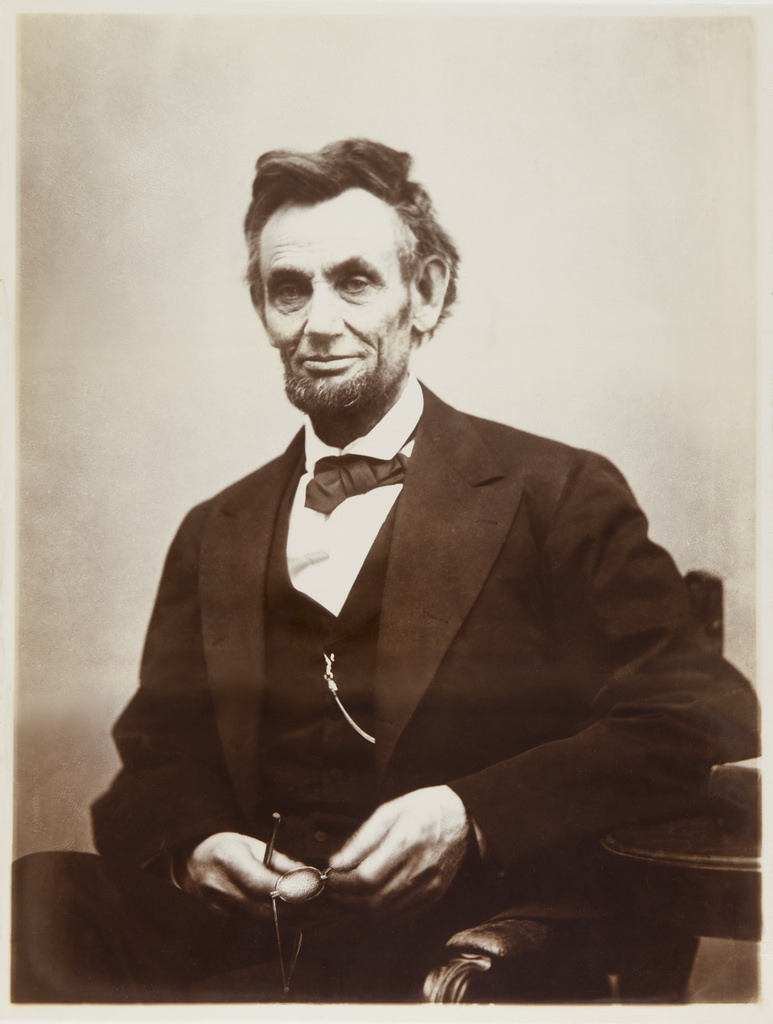 Abraham Lincoln's early life : -    Abraham Lincoln was born on February 12, 1809, at the place called Hardin County in the state of Kentucky in the United States. His father's name was Thomas Lincoln and mother's name was Nancy. Abraham's older sister was Sarah and younger brother Thomas, who had died in his childhood. Abraham's father was a very poor man. They were able to pass through their families very difficult. Even he was unable to send Lincoln to school. I would like to point out that Abraham did not complete most of his studies at schools or colleges, instead he stayed at his home and used to study books by asking friends or neighbors. In Kentucky, Abraham's father, Thomas Lincoln, was stranded in the ground, so he had to leave the ground and go to Parry County in Indiana from Kentucky with his family in 1817. He bought a little land here for farming.

When Abraham was only 9 years old, his mother died at the age of 34 on October 5, 1818. It was Abraham Lincoln's greatest shock in life at that time. But after 1 year, her father married with a widow named Sarah Bush Jonson and she had three children. It is often seen that stepmother does not take much care of children. She  is a cruel in nature for the children. But here it was not so, Sarah Johnson was a strong and affectionate woman. Sarah herself was not well-educated, but she always encouraged Abraham to study. As we know that Thomas was a very poor farmer, due to which he did not have much money for Abraham's studies and he did not give much importance to Abraham's studies. Apart from this, Abraham did not like to work hard in childhood. He spent most of his time reading books and writing poetry. This was also one of the reasons that Abraham and his father's thinking did not match. To read the books, Abraham had to walk far and wide to get books. There are many tales of obstacles related to Abraham's education in his childhood. One of which is also .

Once Lincoln got a book of biography of America's first President George Washington from one of his neighbors. But that day it was raining very fast, due to which the book kept in the cottage got wet. At this time due to poverty, his condition was that he could not buy another new book. He told the neighbor that I will do double the cost of the book by doing wages in your farm. His neighbor accepted this and after that Lincoln paid the price of the book by working in the neighbor’s farm. From this point we find out what types of obstacles Lincoln has to overcome to complete his studies.

Abraham Lincoln's advocacy:          In March 1835, Abraham moved to the county house with his family, at that time his age was only 22 years old. Abraham Lincoln's height was 6 feet 4 inches. He was thin and strong man from the body. He came here and started working as a wage worker. At this time he used to do small jobs, such as a watchman, working at the shop etc. But in the end, he opened his general store and after some time he got a job as a postmaster. This led to increased acquaintance and prestige in the society. It all went on for the years. But they had a strong hatred from atrocities on slaves from the beginning, they wanted to eliminate slavery. For which he took the lead in politics in 1837 and he became leader of the Whig Party. He contested many elections, but he got failure in most of the elections.

Meanwhile, in 1842, Abraham Lincoln married a woman named Mary Todd. Mary gave birth to four boys one after one. But of these, except Robert Todd, all of them died before 18 years. Lincoln's views were not met with Mary Todd.

Lincoln decided to become a lawyer for the justice of the poor and their economic progress. For it, he started studying advocacy. In 1844, Abraham Lincoln started training of advocacy with William Hernando and after some time he became a lawyer. Lincoln practiced advocacy for 20 years and never fought a false case. He did not take much money from the poor for their fees; he got mental peace and contentment with the help of the poor. He did not believe in earning more money. Lincoln was very honest about his work, whose story is still famous -

Once in one case one of his clients gave him $ 25, but he returned $ 10 saying that his case fee is only $ 15. Similarly, after winning a woman's case, her assistant lawyer took more money from that woman. But Abraham asked his assistant attorney to return the extra money to the woman. Usually he advised his clients to settle the matter through amicable settlement and negotiation outside the court, so that money from both sides could not be wasted in litigation. He was a very honest and true man. He say that when someone does good, feels good and makes bad then feels bad.

Political Round of Abraham Lincoln:      Abraham Lincoln served a single term in the U.S. House of Representatives from 1847 to 1849. His foray into national politics seemed to be as unremarkable as it was brief. He was the lone Whig from the state of Illinois, showing party loyalty, but finding few political allies. He used his term in office to speak out against the Mexican-American War and supported Zachary Taylor for president in 1848.   In 1854, he was associated with the Whig Party, but after some time the party broke down. In 1856, he became a member of the Republican Party. He proved to be a very capable leader of this new party. At this time, he stood for the Vice Presidential election, but due to getting less votes, he lost in the election. After this, he studied the causes of his failure and again started a new beginning. At that time in America, slavery was at its peak; Americans used to exploit Africa's black people; they used to work 24 hours in their fields and homes, they were kept slaves. They were treated inhumanly. They were beaten badly, even killing them. The nation's full focus was on the verdict of violence in Kansas and the judgment of Supreme Court in the case of Dread Scott, which was a dispute after the cases of slavery. The people of the northern states were against this practice of slavery and wanted to end it, but the people of the southern states did not want to be banned slavery. Lincoln liked America mostly because he had done a lot of work to eliminate the slavery in the country. In one of his speeches he said, "There can be no division of nation, half slaves and half can live without slaves, all will have to be united." America's constitution is also based on man's likeness, so there should be no place of slavery in the country. In this difficult time, in view of Abraham Lincoln's speech and his actions, his name was chosen for presidential post.

Abraham Lincoln was elected for the 16th President of the United States in 1860. After the election of President, Abraham Lincoln's attempt was to end the practice of slavery from the nation. The people of the southern states used to enslave the people of the northern states, in the meanwhile, a civil war broke out between the northern and the southern states, which lasted from 1861 to 1865. On February 1, 1861, Mississippi, Florida, Alabama, Giovgia, Louisiana, and Texas became separated. As the war progressed, Lincoln started an abolishingist movement to end slavery and he also succeeded in it. In 1863 the mortgage free states were announced and documents of freedom of slaves became in the states. But in Missouri, Kansas, Nebraska and Arkansas, slaves did not get freedom from legal stakes. In 1864, the end of the Civil War began to appear clearly and the North states won and the law was made to liberate the practice of slavery. In this civil war more than 600,000 Americans were killed, but Lincoln managed to calm down and win the Civil War. He declared slavery to be illegal.

Assassination of Abraham Lincoln: -        On April 14, 1865, in a film theater of Washington D.C, Abraham Lincoln shot by the famous and well-known actor John Wilkes Booth.  He was taken to the Petersen House across the street and laid in a coma for nine hours before dying the next morning. His body lay in state at the Capitol before a funeral train took him back to his final resting place in Springfield, Illinois.In this way an honest and popular president of the country died.