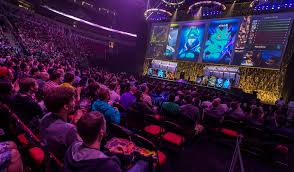 Have a look at the best games to not only play, but watch as well!

Competitiveness has been a major part of gaming ever since the very first game, digital ping pong simulation, was released. There is always that need to prove yourself to be better than your opponent and that is part of what has made gaming so popular and kept the industry thriving for decades.

However, the concept of eSports is relatively new in gaming and it is quite surprising that it took so long. What isn’t surprising though is the fact that it caught on fast and has become overwhelmingly popular in a blink of an eye. There is no question that eSports has a bright future but how about the present? What are the best games for eSports right now?

If there is one thing that eSports loves, it’s team vs. team competition and the ability to follow every little bit of action and LoL most definitely has it. Add more than 100 unique characters into the game and a high skill ceiling, and you’ve got a game that seems like it was molded specifically for competitive gaming.

FPS games have been very popular for decades now, largely thanks to the Counter-Strike franchise, so it is no surprise that one of the best games for eSports has also come from Valve. Although not the only competitive FPS game, CS:GO is probably the most popular out of the lot and for good reason, as not only is it part of a legendary franchise, it has all the excitement and action necessary for the competitive scene.

This is one of the new breed of games that has found its way into the hearts of gamers all over the world. Rocket league is unlike any other game out there, as you control cars playing a game of soccer, using all kinds of boosts and tricks to get to the goal first. The idea is crazy, sure, but it has paid of in bunches, as the game has surely become one of the best games for eSports right now, due to its unique, yet captivating action.

Check Out Games At Best Prices

Catch Up On The Latest Gaming News

1574
See the website by checking the best online bin...