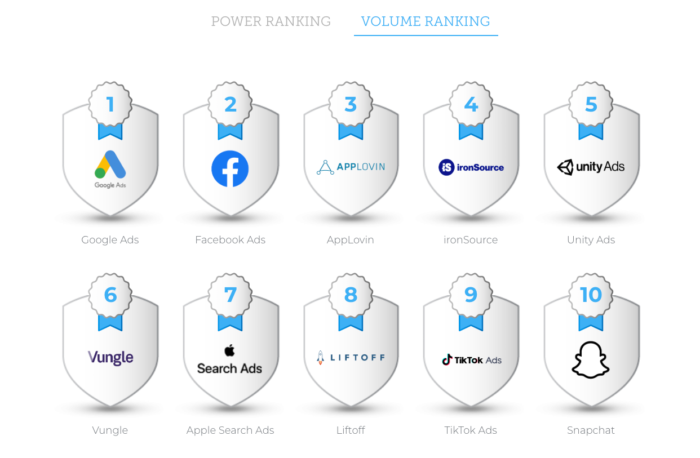 For years, Facebook has been at the forefront of the number of mobile app installs. But this is now past after the ninth edition of the AppsFlyer Performance Index , for the first time in history, Google has surpassed Facebook's rapidly growing numbers, securing first place in volume rankings.

However, AppsFlyer, a mobile attribution and marketing analytics provider, states in its report that Facebook continues to lead the global power rankings. This is because user input and further tracking provides high quality users in most regions and categories. Facebook continues to lead the non-organic installations in all app areas, with the exception of midcore gaming apps (Adventure, Simulation, Action, Arcade, Racing).

Since users register on Facebook with a fixed account and constant preferences, a retargeting measure via Facebook is extremely efficient. You can also see from the numbers published by AppsFlyer that the number of apps that bet on it increased by a staggering 57 percent.

However, Google is also progressing in the retargeting index rankings and improving its ranking in the gaming index by five places, ahead of its competitor Criteo in the non-gaming sector.

It remains exciting to what extent the retargeting conversions still develop, if one sees them in relation to the potential. Gaming apps currently account for just under two percent of retargeting, providing a tremendous opportunity for marketers and mediation platforms.

Other players in the market

AppLovin has established itself as the number three behind the two giants and increased its numbers in the previous half year by 10 percent. The competition, IronSource, however, has increased its app installations by 32% over the same period, so 3rd place could soon be assigned to a new digital advertising company, so AppLovin can not rest on its laurels to stay on the podium.

While AppLovin is starting to grow with its own video game publisher - Lion Studios - IronSource relies on a steady, stable use of advertising material. There can be much speculation about the further growth of the companies and assumptions can be made which of the two companies finally prevails; However, it is clear that a separate App Mediation Platform can lead to the monetization of advertising space and thus to increasing sales.

Also, the places further down the rankings of Unity Ads or Vungle may show strong growth and become a serious threat to world market leaders over the next few years.

Away from Facebook, there are other social media platforms that are often used to display ads in the mobile application area. Snapchat, Pinterest, Twitter and TikTok deserve special attention here.

Snapchat increased its app marketing revenue by 10 percent, adding 62 percent more app installs than the previous half. However, the main source of income was not the gaming sector for apps, but shopping applications.

Pinterest has doubled its reach in the first half of 2019. The 300 million monthly regular users also show Pinterest's growth, most notably in the shopping, and lifestyle & culture sectors.

Twitter was also able to increase the number of app installations by about 15 percent, with hardly any gaming apps being distributed here. With the idea in the background that Twitter is a mainly news-oriented and fast-spreading information-oriented side, this fact is little wonder.

Regrettably, there is still a strong influence of fraudulent networks on the ranking. But there is a ray of hope. Many advertisers have now recognized these fraudulent networks and are thus able to transfer their budgets to trusted platforms. For example, the number of fraudulent installations decreased by 60 percent, while the number of trusted sources increased by 25 percent. However, as the trusted installations outweigh the overall growth was not stagnated.

If you want to read the complete AppsFlyer Performance Index, you can enter your data and download it here.