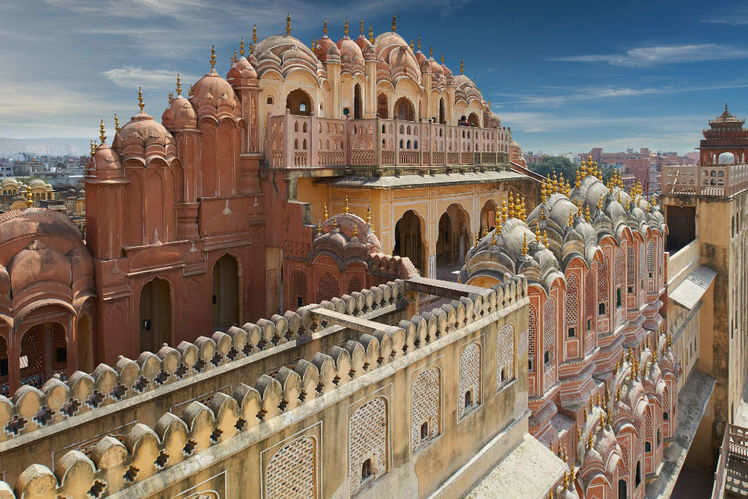 If you like exotic Destinations, Yaipur or Jaipur, in India, you will love it. Known as "the pink city," the capital of the state of Rajasthan is related to royalty and hospitality. Are you with us for a walk in its streets?

It was founded in 1728 by Maharaja Sawai Jai Sing, a great fan of astronomy. His successive rulers provided personnel and tools to the Mughal Empire for their struggles. The warmongering of the villagers forced them to fortify many of the city palaces.

At the end of the 18th century Jaipur was divided between the different "important lords." In 1818 a treaty was signed that granted British protection. After the subsequent revolts and the abolition of the principality the Maharaja retained honorary functions.

The original old town is known as "the pink city". All historic buildings are painted in salmon tones that, for local culture, are equivalent to luck. This decision was taken in 1905 on the occasion of the visit of the Prince of Wales to the city. From that moment, pink is also related to hospitality.

Jaipur is symmetrical and its layout attracts attention. It is surrounded by a 10-door wall and is divided into six neighborhoods, separated from each other by large avenues. It is one of the best developed cities in India, not having too chaotic streets due to its large extensions.

What to see in Jaipur?

The city of Jaipur is 265 kilometers from Delhi and 932 from Mumbai. Its main attractions are:

The Palace of the Winds according to its translation was built by the Maharaja Sawai Pratap Sing in 1799. It served as an extension of the women's chamber destined for the harem. From their multiple windows the wives and female relatives of the monarch could see the daily life of the streets of Jaipur without being seen.

Hawa Mahal has 5 floors, being the two narrowest superiors, hence its pyramidal appearance. It was built in red and pink sandstone and its architecture allows wind access so that it always stays cool. It is in the heart of the city and to access the upper floors there are no stairs, but ramps. It is the symbol of Jaipur.

The maharaja founder of the city was a fan of astronomy, as we have already commented. His hobby led him to build 5 astronomical observatories in India, one of them in Jaipur.

It houses a collection of sculptural monuments that allow you to study the evolution of the shadows produced by the sun. It has a structure 27 meters high whose shadow moves 4 meters every hour.

The Water Palace is located in the middle of Lake Man Sagar and the works belong to the Maharaja Singh II. During the rains the lake is full and allows access to the palace through boats.

It is currently uninhabited and cannot be visited due to water contamination. But it can be seen from the shore. It is of Mughal and Rajput styles, the sandy red stone was used to erect it and its octagonal shape is decorated with elegant domed towers.

This palace complex is located just 11 kilometers from the city and was built in honor of the Mother Goddess on the remains of a previous building in 1592. It underwent several modifications in the following two centuries and is connected to the city of Amber by fortified passages. The fort overlooks Lake Maotha.

This city is almost 100 kilometers from Jaipur, but it is worth visiting. It has two fantastic places. On the one hand, Chand Baori, an inverted cone-shaped pit with 13 stepped terraces, almost 20 meters deep that includes images of Ganesh and other Gods.

The other is the temple of Harshat Mata. It has three terraces, dates from the ninth century and a ritual is performed daily in honor of the goddess of joy.