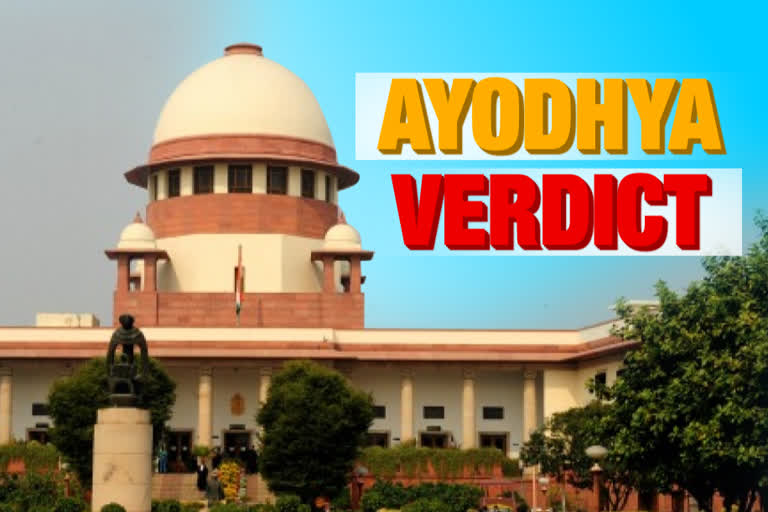 "Justice has been served."

"Peace must be maintained."

There were plenty of opinions flooding the internet after the much-awaited Ayodhya Verdict was pronounced. Muslim's likely justice, whereas Hindu's awaited inheritance of 'Ram Janm Bhoomi.'

ETV Bihar News and ETV Bharat Latest News are here to bring forward the suppressed side of the Ayodhya Dispute.

On 9th November 2019, the Supreme Court led by Chief Justice Ranjan Gogoi announced their decision over the controversial Ayodhya dispute. The 5-judge Constitution bench gave away the verdict in favour of Hindu's and asked the government to grant 5-acres of land to the Muslim's at a prominent place for building the mosque.

The verdict got mixed reactions from both sides, making it a hot topic for weeks.

Arguments and debates led on; some people welcomed the verdict; some claimed it to be biased. The fact that roars of acceptance and triumph masqueraded the cries of foul-play speaks volumes about the role of social media, media houses and politicians in our country.

Whoever spoke against the judgement was warded off as an extremist but as the proverb goes, "Truth Shall Prevail"; it must and it will.

Under the cloak of new-found religious tolerance, secularism, nationalism and whatnot, many forgot the bases of what the fight originally was.

The melee was not for a mere piece of land but violation of every individual's Fundamental Rights. It was against the hooliganism, against forced capturing, against hurting the values and virtues of the minorities in our so-called secular India.

Alas, most of the Muslims in our country feel that their rights have been brutally shredded off with the verdict given by the Supreme Court.

Nonetheless, the Supreme Court played it like any parent would play it with their children. Here's how the story goes-
"Two kids wanted the same chocolate. Kid A did everything possible to snatch away his siblings chocolate alas, all in vain. Both of them went to their parents.

Kid A got that very chocolate, whereas Kid B was given a bar of different yet bigger chocolate as compensation for providing the 'firstborn' privileges to Kid A."

What people don't understand is that it's not about who gets the bigger chocolate, it's about what bias worked up the parents' mind that they readily took what belonged to Kid B and gave it away, pretending as if it were the right thing to do.

Muslims, being a minority in India, has been subject to such bias for time immemorial. It's not erroneous to say that had the verdict been given in favour of Muslims, there would've been maximum chances of brutal outbursts, bloodshed and religious turmoil.

Our nation is patting the Muslim community's back for accepting the judgement with an open heart, being the bigger person in this picture. However, Muslims were more concerned about what their condition would've been had the decision been in their favour; hence, the shut out. The acceptance was a product of fear.

There is a lot of controversy revolving over what should be the appropriate fate of the 5-acre land. Some refuse to accept it, some wish to build a memorial to pay homage to all the innocent souls we lost to lynching, and the rest want to construct a school or hospital over the land.

India has written down a new definition of democracy. Indian democracy revolves around safeguarding the interests of the majority while compensating for their heinousness with little lollipops.

None of the people wants a mosque to be built. Is it because of the fear of witnessing a barbarous demolition shortly, or is it because the Muslim minority doesn't wish to be at the starting point of another controversy?

Tune in to ETV Bihar News and ETV Bharat Latest News to get the latest updates on Bihar and India.