Ford Mustang: The muscle car with the blue oval badge is a hoot! 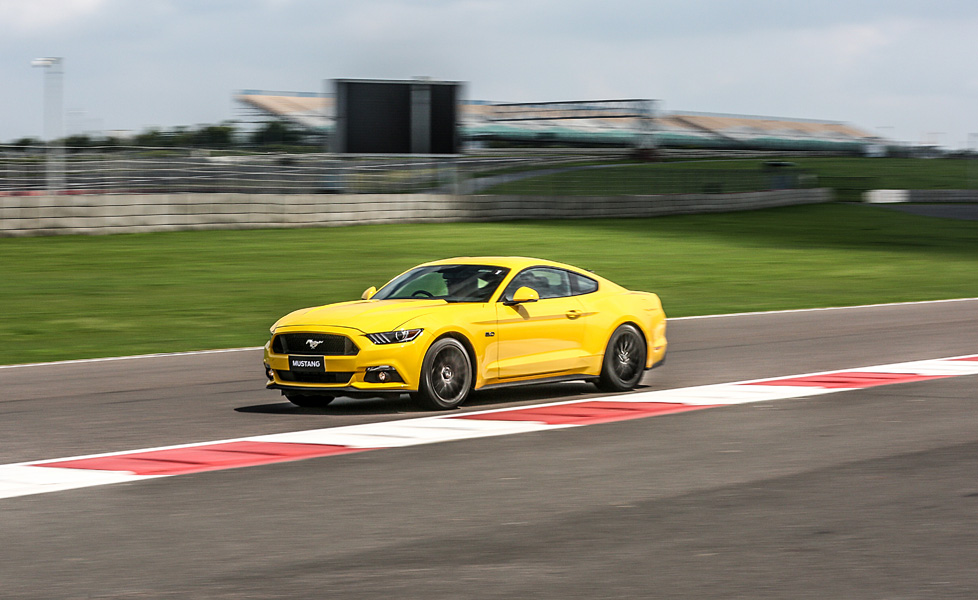 Ford Mustang: The muscle car with the blue oval badge is a hoot!

1964! That’s when the first Mustang debuted in the Indian market. So, it’s implied that the car you see above has a rich heritage and pedigree in the American muscle car department. When Ford announced they’ll be launching one here, for the first time in the Indian market, it was a day to rejoice for the enthusiasts. The wait was finally over in 2016 when we had a snazzy Mustang finished in yellow right in front of our eyes, only this time we were allowed to sit on the driver’s seat and experience it at the BIC for a few hot laps.

So, the availability of a Mustang from a local Ford dealer was, in itself, an achievement for the growing Indian automotive market. And, of course, this was a right-hand-drive version of the mighty American muscle car.

That was then, and what we can confirm now is a facelift. Yes, a facelift for the Mustang is on the cards for the Indian market. It is expected to make its way in the Indian market in the first quarter of 2020, and yes, it will come with a BS-VI approved engine. But, as of now, we have no official confirmation on this news, and we can only hope Ford introduced a facelift – which was unveiled last year – in the Indian market. But what exactly will be new? Have a look.

There’s simply nothing else that’s like the Ford Mustang. The design is simply stunning, and it turns heads as much as, say, a Porsche 911. The newer one is expected to be mildly aggressive than the ongoing model, in terms of the overall aesthetics. As for the specifications, the ongoing Mustang measures 4,781mm in length, 2,080mm in width, and 1,391mm in height. It has a wheelbase of 2,720mm and a ground clearance of just 137mm. The kerb weight is 1,770kg, and the fuel tank capacity is 60.9-litres. It has a usable boot, too, at 383-litres.

The facelifted Mustang will be sold with the same engine – which, of course, will be compliant with BS-VI emission standards – as with the pre-facelift model. For reference, the Mustang features a 5.0-litre V8, which is capable of churning out 396bhp and 515Nm of torque. The facelifted car might witness a slight bump from these figures. The gearbox, which is a 6-speed automatic, will be the same, although the tuning might be a bit different.

It will still be a rear-wheel-drive car – so that it remains tail happy – with no FWD or AWD to be available even as an option.

It feels almost redundant mentioning the mileage of a sports car. But, as expected, the facelifted version will be less frugal in comparison to the older model, for it will be more powerful and greener. The ongoing Mustang, for reference, delivered around 6-7km/l in our tests.

Again, the Ford Mustang is not the most feature-rich car in its class. If you’re simply looking for a feature-rich car, then there are many better-equipped cars in this class.

For what it’s worth, however, the Mustang still comes with a lot of modern techs. There is, of course, a touchscreen infotainment system which is borrowed from the Endy. You also get a push-button start, different driving modes, climate control, steering-mounted controls, ventilated seats, and then some.

The Mustang, as of early-2020, comes in five shades, namely, Absolute Black, Ingot Silver, Oxford White, Race Red, and Triple Yellow Tri-Coat. Sufficed to say, the Mustang looks the most desirable in the Red and Yellow shades.

All the details regarding the Ford Mustang, namely, the engine, specifications, variant wise equipment, colours, dimensions, interiors, and exterior details are extensively covered in the brochure.

As of early-2020, the Ford Mustang is available in a single variant, with just a single petrol-automatic configuration. It is priced at Rs. 74.61 lakhs for the GT Fastback 5.0L V8 variant (ex-showroom, Delhi). Expect the prices to rise as the BS-VI model arrives in the market. For what it’s worth, the price is still extremely competitive going by sports car standards. For the variant-wise on-road prices, visit us at autoX.

For more on the Ford Mustang, be sure to tune in to autoX.