What Google is Trying to Tell Us 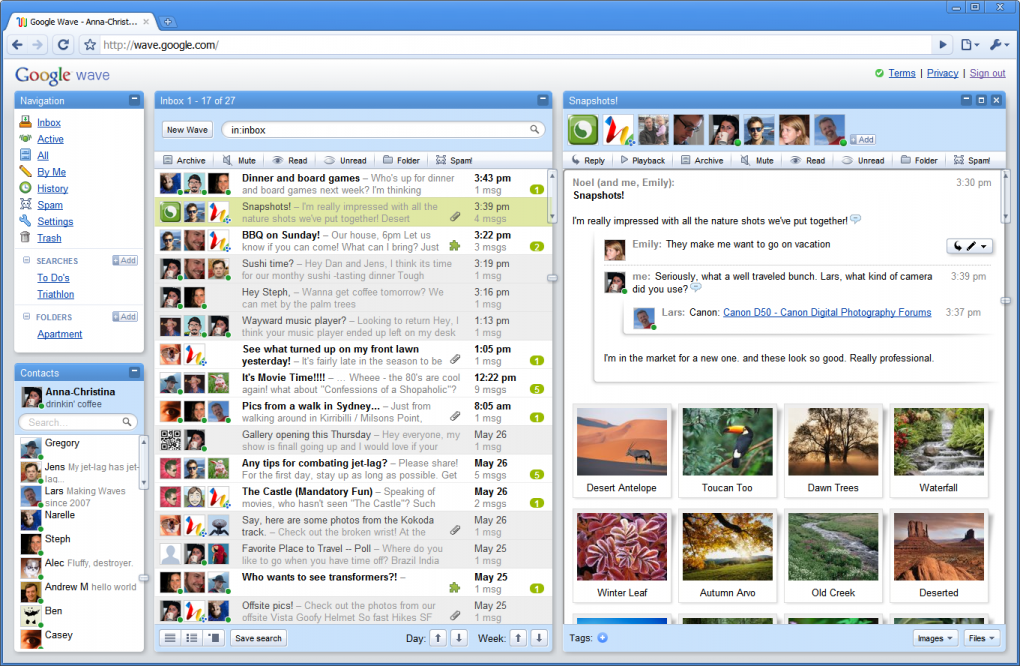 What Google is Trying to Tell Us

The 28th of May this year might end up being one of the most influential 24-hour periods in web history. It was on this day that Google launched a new communications platform called Google Wave, and if Wave lives up to its promise it may change digital communication forever. While the web elite are all abuzz about the impact of this new platform on the way we communicate, Google has quietly been releasing a steady stream of new products and further improvements to their core product, the search engine and its related advertising tools. Google is not going to give us a roadmap for what this all means, but it is possible to look at the patterns and take a long view.

The search landscape
There has been a lot of talk about the new kids on the search block, Wolfram Alpha, Twitter search and Microsoft's latest entry, Bing (which could be an acronym for 'But It's Not Google'). Some commentators have been speculating that many of the additions to Google search pages, such as the new options area where there is real-time search among other features, are Google's answer to real-time search on Twitter search, and the decision engine promised by Bing. And while competition has undoubtedly accelerated Google's release of features, it is a pretty safe bet to assume that Google is not simply being reactive.

Google owns over 70% of the search market world wide. Wolfram Alpha is designed as a computational enginewhich, in plain English, means it is an attempt to create a type of artificial intelligence and tease data out of the internet in a different way. Not really a direct threat to Google - in fact it can be seen as a complementary feature. Twitter Search is a real-time search engine based on the collective conversations of every Twitter user. Interesting but also not a huge threat to Google search. Bing, combined with Yahoo, is really the only direct threat to Google. And, while Microsoft and Yahoo are spending a lot of money on marketing, they have a long way to go.

Google products are everywhere
Currently Google has something in the vicinity of 200 applications and services available, most of which are free. New ones seem to be coming out on a weekly basis. A few weeks back we saw the release of Google Squared, a very interesting research tool with loads of potential. A visual search tool for news, Flipper, is expected shortly. And recently Google announced that will be launching a new operating system.

It is fairly common knowledge that any technology Google develops is directed at increasing the usage of the web as a whole, thereby increasing the value of it's main revenue stream, AdWords, the advertising medium based on relevance and consumer intent.

Forget eBay, AdWords is the world's biggest auction! Every single search that is performed on Google is automatically analysed so that the most relevant 'sponsored link' is displayed on the page and, of course, paid for by the advertiser. When you look at the cost of an individual click the numbers are small. But when you analyse the volume of searches that are performed it really starts to get impressive. Enough to net Google USD $21 Billion in 2008.

The temptation is to draw the line there... "Google is trying to get us all to use the browser even more, so we can do more searches, so they can make more money". This is true - but there's more to it.

I've seen the future and it's thin
The big difference between using Google AdWords and say print advertising - apart from the huge difference in volume of data you can extract, is that it levels the playing field. You can be a multi-national corporation with tens of millions to spend but if the copy of your ad is less relevant to the searcher's intent, than an ad by a one-person shop you won't get the top spot. It is this fact that has seen online advertising for the SME market skyrocket. Naturally, Google is well aware of this.

The web has become almost as essential as electricity and water in most of the technologically advanced areas of the world. In these societies the middle class are the highest users. But Google has spotted that poorer, less advanced countries present a huge growth opportunity. The current barrier to entry for this demographic is the window into the net: the computer.

Much of the cost of a computer is tied up in the processor power and the disk space. What Google is doing by creating free 'software as a service' applications (cloud computing) is removing much of the technology requirement and cost. If all the processing is done at Google's end the client's machine need not be the latest and greatest computer on the market. The dramatic uptake of the NetBook is a great example of this. And the sale on eBay of the first generation of NetBooks for a few bucks presages the opening up of entirely new markets.

This is all about taking everybody towards a 'thin client model'. In this case the 'client' is the web end point - your window in the web - be it a NetBook, a TV, a phone, or just a screen plugged into the wall. The 'thin' part is the technology. Keep it simple and keep it cheap. The idea of the thin client model has been around for a while, but Google is doing the most to advance it for the general population.

Hold on - we're about to take off
When the technology gets cheap enough, the new target market for search-related products will be most of the world. Google knows this and is already investing a lot of time into removing another barrier - language. One of the plug ins showcased when they launched Google Wave was a language translator that works as you type. This enables you to have real-time conversations with anyone in the world. Together these innovations will bring information, education, and wealth to the masses in entirely new geographies. My site Google Wave Fail

In short Google knows it has the lion's share of the current search market. They are  now aggressively creating entirely new market - ones that are potentially much bigger.

As marketers we shouldn't underestimate the size of this opportunity. Sure, we will have to learn new technologies and customs, but we will also be able to market to entirely new groups of people with a new range of needs and wants - a part of the world that will grow in power and influence. If you thought the first 20 years of the world wide web brought a lot of change to the way we do things, you haven't seen anything yet.