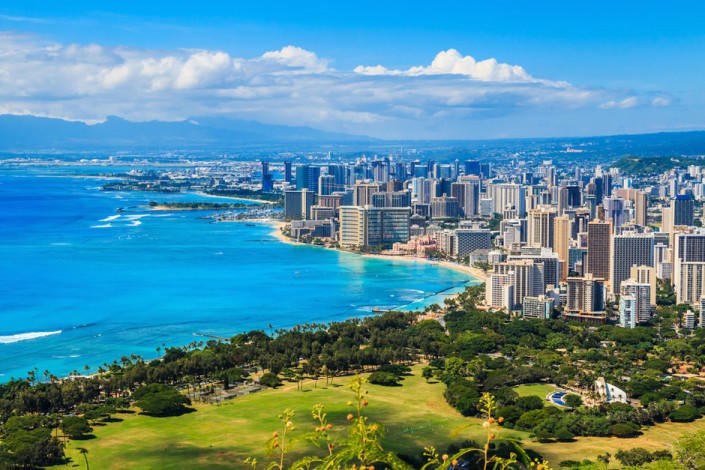 Hawaii's capital city is the most famous tourist spot in the region and is the perfect city for anyone seeking a tropical vacation. The climate here in Honolulu is wonderful.

Honolulu Surrounded by natural beauty all around, come to Honolulu and witness the synthesis of Hawaiian culture and heritage. Being in Honolulu is going to confront many of the city's traditional habits and etiquette. Hula dance is the traditional classical dance of the Hawaiian region.

There is a certain charm about the culture and habits of the city. For example, it is considered manners in a high manner to present a token of love as a form of a gift to the host. There is a Take-Plate culture being followed traditionally in Honolulu, which is basically gifting food items to each other during friends or family gatherings. Interesting, isn't it? How about you fly to Honolulu and experience the one of a kind custom of Honolulu all by yourself?

How to Reach Honolulu?

Honolulu International Airport (HNL) is the major airport in the region, which is situated on the beautiful and most populous island "Oahu." It is one of the busiest airports in the United States of America with annual passenger traffic of over 21 million passengers. Moreover, HNL has direct flights to several destinations throughout the State of Hawaii along with destinations throughout the United States, Canada, Australia, Samoa, New Zealand, American Samoa, Tahiti, Taiwan, the Philippines, Kiribati, Japan, China, and South Korea.

Daniel K. Inouye International Airport (HNL) is the main hub of Hawaiian Airlines, which makes it the most affordable air carrier to fly from/to Hawaii because of flight frequency operating to/from HNL.

Top Places to Visit in Honolulu

If you have chosen Honolulu as your next holiday destination; then don't forget to visit places, including Diamond Head, Pearl Harbor, Hanauma Bay, Ala Moana Center, Koko Head, Bishop Museum, Honolulu Zoo, Sandy Aquarium, Royal Hawaiian Center, Sea Life Park Hawaii, Aloha Tower, Waikiki Aquarium and Manoa Falls. You cannot make most of your vacation if you miss any of these spots.

Top Things to Eat in Honolulu

The presence of contrasting Hawaiian history distinctively imitates the food history of Honolulu. The traditional native food of the people of Hawaii consists of rice, fish, sugarcane, yam, and vegetables; there are also many authentic dishes in the city you should try. Poi, Kalua pig, Laulau, Lomi-lomi salmon, Chicken long rice, Poi donuts, Spam musubi, and Squid lu'au are such dishes you need to consume to get the true Hawaiian culture.

How to Book Affordable Flights to Honolulu?

No air carrier can be the best than Hawaiian Airlines if you are planning for Hawaiian Vacations. The flag carrier of Hawaii is known for its exquisite authentic Hawaiian hospitality on-board. The passengers can have a blissful experience all through the journey that too without driving a hard bargain.

So, this vacation, visit the official website of the airline and search for enticing deals to make Hawaiian Airlines reservations . Passengers can even opt to call travel agent who is ready to help you in your Honolulu ticket booking round the clock.

So, what are you waiting for? Began your travel planning today. Book sun country airlines reservations at best price tickets only from reputed organizations

The benefits of bulk SMS that your business can...

6451
Choose the best thermos for coffee to Keep Your...

5958
Branding Yourself Through Social Media Engagement

1868
Business and job opportunities in Qatar

Many people from other countries are moving to Qatar due to great job and business opportunities. People are bringing their ideas and passion and making an impact on the economy of Qatar.