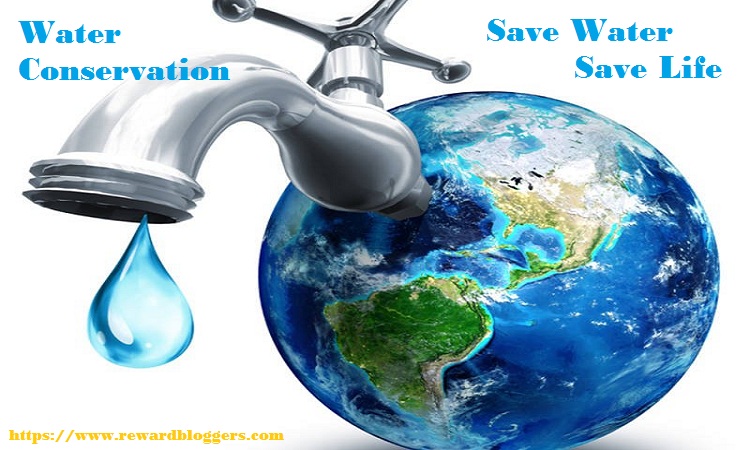 Using water properly, recycling of water and saving water by various means is called “Water Conservation”. The goal of water conservation can be achieved only when every citizen of the world understands his responsibility to save water, but many of us are like those who do not regard their responsibility towards water.

We are well aware that due to population growth, industrialization and human development, human needs have also increased regularly. One of the important requirements for human beings is water.

“By the way, one-third part of the earth is water. If we talk about of clean water, it is only present in the 3% volume on earth.” Water is a priceless gift given to man by the nature. Man can survive for a while without food and home, but he cannot live without water even a moment. Everything on Earth and all living creatures need water.

Earth is the only planet in the whole universe, where water and life are present. Scientists are still searching that water and life may exist on some other planet, but this has not been possible so far.

Earth is surrounded by approximately 71% of the water. 97 percent of the water present in the oceans is salted. Only 3% of the water is worth for use, even less than 1% of it is worth drinking water on earth.

Now you must have understood how much water is necessary for us. If the water used to be misused, then our future generation will be looking for drinking water and it is said that if the third war would have then it will be due to water deficiency.

There are many places in the world, such as India, Africa and people in rural areas of Asia have to spend long distances for clean water and have to make long queues for water.

Thousands of farmers commit suicide each year due to drought in the area of ​​agriculture. Today most of the developing countries suffer due to lack of clean water and dirty water.

Millions of people are dying every year due to many diseases caused by dirty water. According to a survey, due to water born diseases, one child dies every 15 seconds.

“Water was not sold at the shop few years ago, but when it started selling at the shops, everyone was surprised to see it. But now, the sale of water is a common thing. Today, people are ready to give 20 /- for drinking water.

Due to industrialization, waste products coming from factories are flown in canals and rivers and due to which their water becomes polluted. Water is used by humans and there is a bad effect on the health of those people.

By adopting some of the above methods, people can contribute to water conservation to a large extent, but in addition to this, people should also take responsibility for understanding the importance of water. If we are not conscious about water conservation from now on, our tomorrow might be more frightening. Due to the name of the water, riots may increase.

Without water we cannot even imagine life for a moment. We must tell about the importance and conservation of water to the people, friends and relatives around us.

So that they can also play their role in conserving water and the shortage of water in time can be dealt with because "water is life".