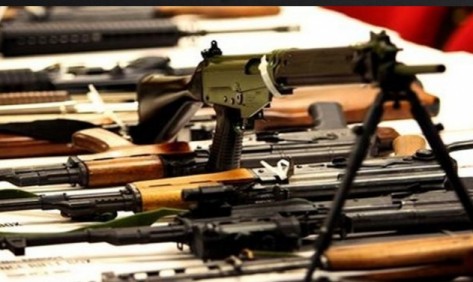 A Personal and special service weapon capable of semi-automatic fire. It is a recoil operated, magazine fed, self-loading pistol in which the breech is positively locked at the moment of firing. It is not fully automatic. The trigger has to be pressed and released for each shot. When all the cartridges have been fired and the magazine is empty, the mechanism is held in the open position by the action of the slide.

The 12 Bore Pump Action Gun has been specially developed for use as a security weapon.

It is a single barrel breach loading weapon superior to 12 Bore DBBL.

It is provided with a tubular magazine, which holds 4 nos. of 12 Bore Cartridges and is placed parallel to and below the barrel.

The Sterling sub-machine gun is constructed entirely of steel and plastic and has a shoulder stock which folds underneath the weapon. Although of conventional blowback design firing from an open bolt, there are some unusual features: for example, the bolt has helical grooves cut into the surface to remove dirt and fouling from the inside of the receiver to increase reliability.

The Joint Venture Protective Carbine is an Indian sub-machine gun designed by the DRDO Armament Research and Development Establishment in 2006 and produced by Ordnance Factory Tiruchirappalli since 2019.

A compact carbine meant for use by law enforcement agencies and militaries, the project was created as an offshoot of the INSAS program.

The AK-203 is a convertible rifle. It can be used in semi-automatic and automatic ways.

According to media reports, the new assault rifle will be about 3.25 feet in length

INSAS is a family of infantry arms consisting of an assault rifle and a light machine gun.

It is manufactured by the Ordnance Factories Board at Ordnance Factory Tiruchirappalli, Small Arms Factory Kanpur and Ishapore Arsenal. The INSAS assault rifle is the standard infantry weapon of the Indian Armed Forces.

The Dragunov is a semi-automatic, gas-operated rifle with a short-stroke gas-piston system.

The barrel breech is locked through a rotating bolt (left rotation) and uses three locking lugs to engage corresponding locking recesses in the barrel extension.

The rifle has a manual, two-position gas regulator. A gas regulator meters the portion of the combustion gases fed into the action in order to cycle the weapon and sets the recoil velocity of the gas-piston system

764
What things you should know when boarding the p...