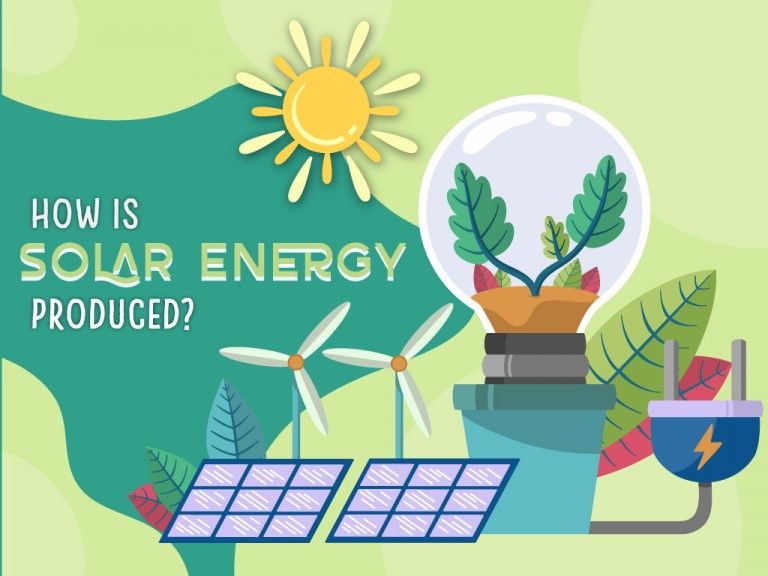 How is solar energy produced?

There is no doubt that there is an increasing demand for electricity nowadays. It can be caused by several reasons like the COVID-19 community quarantine which forced people to stay inside their homes. With that, new solutions like creating electricity from solar energy have gained popularity. When it comes to producing solar energy, one can say it is a complex and interesting process. It might have sparked your interest when you saw the roof of your hi-tech neighbors and their solar panels. You wondered about how it works. Which brings you to the question: How is solar energy produced?

Those state-of-the-art shining glass panels actually came from quite an intricate process that involves harvesting the sun’s energy in order to provide usable electricity to homes. If you’re interested in powering your home with solar energy, take a look at this step-by-step process.

At the very start, solar energy is created through nuclear fusion in the sun. Nuclear fusion takes place when protons forcefully collide in the sun’s core to create a helium atom. This process emits an enormous amount of energy.

Solar panels are linked up together in an ordered manner and placed on rooftops. Once nuclear fusion continues and the sunlight hits solar panels, solar energy is created. That very solar power is converted to the usable electricity people use today.

Solar panels contain photovoltaic cells. The term photovoltaic, once broken down, refers to light and electricity. It is also referred to as solar cells. These cells absorb the sunlight that strikes the panels during the daytime.

Every photovoltaic cell is made up of two layers of semiconducting material. This key material that makes up solar panels is monocrystalline or polycrystalline silicon. Each solar panel consists of a layer of the said silicon cells, a glass case that is surrounded by a film, wirings, and a metal frame.

Once the cell is “loose” from atoms within the semiconducting layers, the wirings in the solar panel capture the electric current that is created from this.

However, there’s nothing to worry about because DC electricity can be modified easily to become AC electricity through an inverter. Back then, solar systems had only one inverter serving the solar panel itself. This had its own set of drawbacks because if one panel fails to work, it would affect the whole performance of the system. Now that modern versions of inverters have been introduced, panels have been optimized to perform more efficiently.

After electricity passes through inverters and changes into AC electricity, it goes through the electric panel and power is distributed within the walls of your home. The process works exactly the same as how electricity is generated through the power grid by your utility company.

When you have a solar energy system, it might seem contrasting to continue using the traditional power grid. However, it has its own advantage. Sometimes, there will be cloudy days ahead and your solar panels may not harvest enough sunlight for energy usage. Conversely, when you aren’t at home, they may collect more than you actually need. This is why a net meter is needed.

The net meter is a device installed outside your house that is used to measure the electricity going to and from the grid. It is similar to the typical electric meter but it measures the power going in from both directions.

Net metering is a billing system wherein surplus energy is fed back into your electric utility's grid when your system is producing more than you need. This is where the good news comes in because you can exchange surplus energy for credits or even money if your local electric company allows it. It’s a total win-win situation.

Note that this will only become possible if your home is grid-tied. If you are disconnected, this will not take place because there will be nothing to monitor your usage.

Now that you know about how solar energy is produced, you can now opt to get your hands on those quality solar panels for your own home. Appreciate how human ingenuity made use of photovoltaic technology to harvest the power of the sun and power homes today!