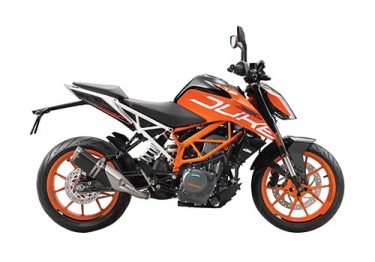 The smooth and effortless journey you hope to achieve while riding a motorcycle should reflect in the experience of purchasing that dream motorcycle. The decision of buying the perfect sports motorcycle can be as thrilling and beautiful as your first ride, provided you know all that you need to. The Duke 390 is a version of KTM’s design that bridges the gap between street-friendly motorcycles and high-speed beasts which belong on a racetrack.

According to new European regulations, the Austrian manufacturer has incorporated an Antilock Braking System (ABS) in the KTM Duke 390, and this is the latest generation of Bosch ABS. This shall prevent locking of wheels- front or rear and offering more control to the rider. The wheels will not lock and cause screeching or accidents. This makes it significantly safer to ride in wet conditions or treacherous terrains. Given how unpredictable roads are, ABS should be a priority you do not compromise on.

Powered by a 373.2cc, liquid-cooled, single-cylinder unit in BS6-compliant form, the bike delivers 43hp and 37Nm, which feels relatively smooth and quiet. 390 Duke received a ride-by-wire throttle that smoothened out the throttle response so that, even with the throttle fully open under 4,000rpm, the bike won’t surge forward. The addition of a bi-directional quickshifter and slipper clutch-enabled 6-speed transmission makes riding at higher speeds easier and the transition smoother, thus making Duke 390 a practical choice for city-dwellers as well. However, higher performance means greater heat, a significant amount of which is wasted in all internal combustion engines. This makes it uncomfortable to commute in the sweltering Indian heat.

The Duke 390 is the safest bike one can purchase for the given price. Priced at an ex-showroom price of Rs. 2.57 Lakh*, the racer bike can be bought with the support of the 2 Wheeler Loan schemes that are available. According to online EMI calculators, the EMI starts at Rs 9,743 per month for a tenure of 36 months.

The prediction for this motorcycle was that the fuel efficiency would be slightly lower than that on the 200. It offers a mileage of 35 Kmpl. The reason for this is the additional power it packs. KTM is extraordinary at holding on to its fuel economy even at high revs which means touring motorcycles with bigger fuel tanks end up offering the same range as the KTM. 390 is a little more frugal in the real world because practically you will carry lower revs everywhere. Additionally, a tall sixth gear, which is excellent for relaxed highway riding, may even be good for the city economy in the places that you can use it.

An updated exhaust system with a catalytic converter has been re-routed under the engine instead of the side. This has brought with it a 4kg increase in weight. The overall design of the motorcycle is aggressive, raw and sharp. A shade of orange colour on the fuel tank, trellis frame and alloy wheels stand in contrast to the muscular, metallic body of the motorcycle.

The front profile features a split LED headlamp and a muscular fuel tank, which enhances the sporty and robust persona of the bike. The all-new tail section of the KTM 390 Duke is sharp and edgy with the new LED taillight and split grab rails.

Duke 390 comes with a host of features such as an LED headlamp, switchable ABS and colour TFT screen with Bluetooth connectivity. In conclusion, although the makers of Duke 390 have tried to fashion it for highways, traffic as well as the race track, it is stiffly-sprung, consistent with KTM's sporting ethos, and thus might not appeal to the average audience.