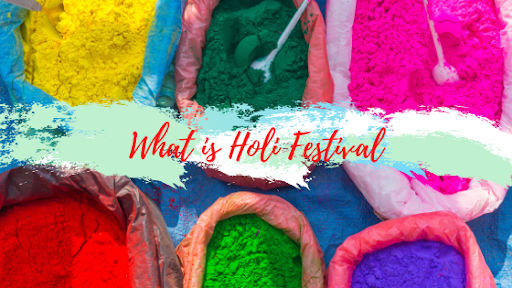 What is Holi Festival

It's a day when the atmosphere is full of happiness and cheer and the air is coloured with the vibrant colours of Gulal and Abeer.

The festival of Holi is celebrated all over India by the Hindus. Holi is the most colourful, joyous, fun filled festival of India and perhaps this festival has the maximum enthusiastic participants. Holi is to celebrate the Vasant ritu or Spring And the harvest season. As per the Hindu calendar, it falls in Phalgun month on Purnima (Full Moon) day, which is mostly in the month of March.  It's a day when the atmosphere is full of happiness and cheer and the air is coloured with the vibrant colours of Gulal and Abeer. It's a festival which binds people in love. In different states and regions of India Holi is celebrated in different styles.

Most Indian festivals comprise of puja rituals but Holi is meant for sheer enjoyment, smearing coloured powder on each other, drenching each other in coloured water, children run after each other in excitement with 'Pichkaris' or water-guns, eating special sweets and food, laughing and simply having fun. This popular Indian festival now does not stay bound to Hindus only as people of other religions too like a dash of colour on them on this day. Now Holi festival has spread its colour of love to foreign lands like United Kingdom, Malaysia and many other countries and is famously referred to as the "festival of colours".

Holi festival is connected to the story of the Asura (demon) King Hiranyakashipu, also known as Hiranyakashyap and his son Prahlada. The power hungry Hiranyakashyap wanted to be revered as God by everyone. The Puranas say that he performed penance to be granted with a boon from Lord Brahma, that he would be invincible and would not be killed by anyone be it human, demon, animals, any weapon, natural calamities or anything at all. The arrogant King thought he has now got it all.  A son was born to Hiranyakashyap and was named Prahlada who from an infant stage showed no signs of considering his father as God. Prahlada grew to be an ardent Lord Vishnu devotee, who spent His time chanting the Lord's name and His faith in Lord Vishnu was such that His father's threats could not waver Him from considering Lord Vishnu as supreme and above all. In anger Hiranyakashyap made several attempts to kill his own son but each time Prahlada remained unscathed. The final blow which Hiranyakashyap made to take the life of Prahlada was when he told his sister Holika to sit on a burning pyre with Prahlada. Holika had a boon that she would not be burnt by fire. The plan was set, Holika forced Prahlada to sit with her on the burning pyre but Prahlada's call of help and trust in Lord Vishnu over powered everything. Prahlada was again saved while Holika burnt to death. This history of Holi is the reason that this festival is celebrated in order to honour this event of good over evil. King Hiranyakashyap was ripped apart by Lord Narsimha, an avatar of Lord Vishnu to end the tyranny of the demon King. Holi festival is also to celebrate this end of evil.

With reference to the history of Holi, where Holika was burnt and Prahlada was saved by Lord Vishnu's grace, on the eve of Holi, people gather to perform the ritual of Holika Dahan (burning of Holika).  In simple words, bonfires with garland of cow dung cakes are lit in localities and people offer Coconut, Wheat grass, Batasha, whole Rice (Akshat) to the fire. They sing, dance and circumambulate Holika and offer new crops to Holika, as an offering of the  harvest season. The prayers in everyone's heart is to be liberated of all evil from within oneself. It is said that Holika dahan removes all fears and brings prosperity. Post this people start playing Holi by applying dry colour powder which is called Gulal and Abeer. Mostly a simple Tika on forehead and a dash on the cheeks by people on each other and blessings of elders of the family are taken to start off the playing with colours.

In ancient times the colours which were played with were completely organic and made from dried flower petals and other herbs. However, in modern times dry coloured powders and coloured solutions meant to be mixed with water are available to play with.

From early morning, on the day of Holi festival, all family members wait to smear colour on each other. Sweets like Gunjia are eaten. Friends visit each other or gather together to play with colours, sing and dance. There are many folk songs, specially from the Northern part of India which are meant for Holi which have naughty and teasing lyrics. A special milk shake with dry fruits called 'Thandai' is much in demand on Holi and friends and family enjoy drinking it. Some mix the intoxication of 'Bhang' in the Thandai, which is particularly popular in the Northern states of India.