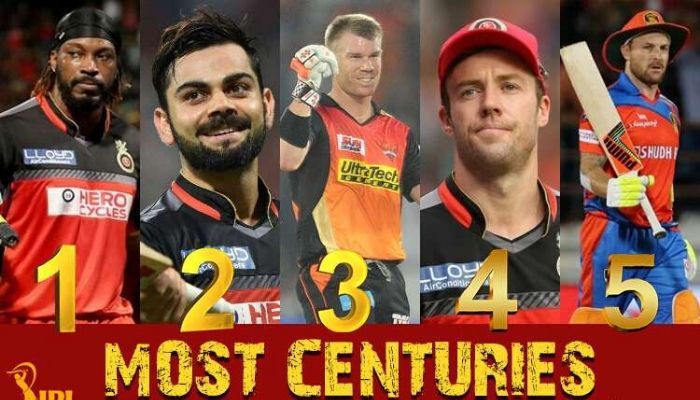 WHEN RUNS ARE SCORES, HISTORY IS MADE

The heroics of batsmen churning out runs make for a masala entertainment as always. The likes of Gayle, De Villiers and McCullum’s ravishing display of finest cricket.

Since its inception in 2008, IPL has been an ideal platform for nail-biting entertainment for cricket fans. The shorter formats heavily favor the batsmen leading to which IPL has witnessed some bizarre performances by them. Each edition witnesses old records being broken and new ones being made, this edition too promises to be exhilarating.

IPL is no less than a festive season India with the pyrotechnics show the batsmen put up. With the new edition around the corner, let us look at the five highest individual scores in the history of IPL. M Chinnaswamy Stadium in Bengaluru surprisingly happens to be the venue at which four out of these five individual scores have been made.

India’s youngest sensation and Chris Gayle tie for the fifth place, with both having scored 128 not out. Gayle’s knock was studded with 13 sixes and 7 fours in only 62 deliveries. His knock came while chasing 215 runs against Delhi. His ton helped RCB win the game comfortably by 21 runs.

On this list of highest scores in IPL history, Rishabh Pant’s knock is the only one that features in a losing cause. While playing for Delhi Daredevils (now Delhi Capitals) his score of 128 not steered Delhi to a score of 185 against Hyderabad. His maiden 63 ball knock included 15 fours and 7 sixes, but it was all in vain when Hyderabad comfortably chased the target.

The stage was set on fire when De Villiers went all guns blazing and scored an unbeaten 129 in just 52 deliveries. He knocked 12 sixes and 10 fours in the tremendous show that he put up with his partner Virat Kohli. They managed to score a record second-wicket partnership of 229 runs. The Challengers ended up making 248 runs at a loss of 3 wickets and posted a 144-run victory. The victory was the second-largest in terms of rums in the history of IPL.

He is fondly called Mr. 360 degree for a reason. He features twice on the list and it goes to show what a fine batsman he is. He blazed his way to an unbeaten 133 against Mumbai Indians, it included 19 fours and 4 sixes. Bangalore went on to make 235 with a loss of only one wicket. His knock propelled Bangalore to win by 39 runs.

Before the IPL began people had varying thoughts about its future and what would it bring forth to the cricketing world. The opening ceremony in itself was a dazzling affair, but no one expected that the inaugural match would be a more breathtaking affair. McCullum destroyed the Challengers at their home in the first-ever match of IPL by making the first-ever century of the IPL. It was a brutal one-man assault, he blasted 158 runs off a mere 73 deliveries studded with 10 fours and 13 sixes. The team went on to post a total of 222 runs for a loss of 3 wickets and also won the match by a whopping 140 runs, the fourth largest defeat in a T20 game.

The Caribbean giant is hailed as the undisputed king of the IPL very rightly so. On his best days, he is a nightmare for the bowlers. The 31st match of the sixth edition of IPL saw a number of records created by him and his team. He smashed an unbelievable total of 175 off only 66 deliveries, the highest score ever posted by an individual in IPL history. His 17 sixes, which was highest by an individual, and 13 fours wreaked havoc on the opposition team. Bangalore went on to make 263 runs, the highest ever total by a team to date.

Heartfelt Snehal Pradhan Shares About Women’s IPL Challenge
654
What are the advantages of online gambling?
534
Cricketers Who Ended Their Career On A Sad Note!
454