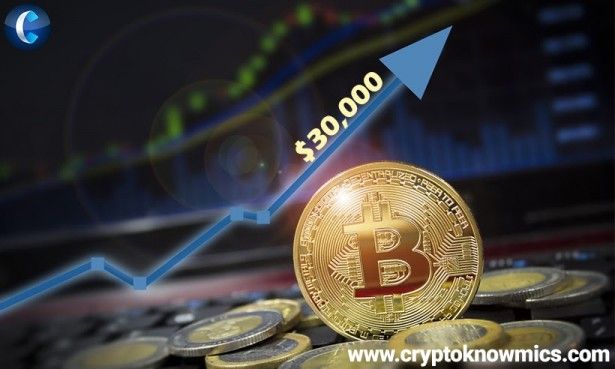 An Educated Guess - Whether Bitcoin can Reach $30,000 USD this New Year

An educated guess about Bitcoin whether it would be able to reach $30,000 this new year. Let us go through the overall performances of Bitcoin in the market.

The History Behind the Origin of Bitcoin

The question is pretty cliche and it is not a surprise to hear this question from the people involved in crypto-business. The whole cryptocurrency universe revolves around Bitcoin and technical advancements and commencements in blockchain technology. Of course, Bitcoin was the first cryptocurrency to introduce itself as an idea to democratize the whole financial systems.

Along with Bitcoin, emerged the most controversial and disruptive technology of the decade - Blockchain Technology. Just a couple of weeks ago, the price value of Bitcoin was around $19,000 USD approximately, the price at this point of time has exceeded $22,000 USD. The spike in the price happened in just a couple of weeks. This is enough evidential to say that cryptocurrency is a volatile market.

Bitcoin has been performing astoundingly ever since it was first introduced over a decade ago. The whole world looks up to this intriguing cryptocurrency which is no less than an inspiration to the whole financial sector. Now every other organization and corporate companies are trying to mine their own cryptocurrency. All this came from Bitcoin or should we say the great recession happened between 2007 and 2009.

Purpose of the Origin of Bitcoin

The great recession was the actual cause behind the idea of creating a new currency that would unite the whole world and democratize the financial systems. That’s when the idea of Bitcoin came into light and released under the pseudonym - Satoshi Nakamoto. The cryptocurrency has a lot of potentials and it was clear from the very beginning. An idea can change the whole world.

The idea of cryptocurrency was flipped in the name of Bitcoin and that is why people are so inclined towards Bitcoin besides 1000s of cryptocurrencies in the market. That is the whole point of cryptocurrency, you do not need a centralized authority to tell you what to do with your monetary function. You do not need to answer to anyone or seek assistance from intermediaries to process your transactions.

The concept blew the minds of people who were frustrated by the complex administration systems of the conventional financial systems. People immediately welcomed the idea but still, so many people were so much sceptical and suspicious about the administration and executions of monetary transactions in the beginning. People were quite oblivious to the concept of blockchain technology and were afraid they might get scammed at some point.

Needless to say, a lot many people even got scammed in the beginning too. Then it took a couple of years to prove the authenticity and legitimacy of cryptocurrency and blockchain technology. Now the whole world is approaching blockchain technology to power the existing business models. If you want to achieve more conviction about Bitcoin, you must refer to the renowned and elite cryptocurrency exchanges in the world.

It emerged from Bitcoin only. The only reason why it got so much success is that it was a fork that originated from Bitcoin. The name “Bitcoin” already gives Bitcoin Cash enough authenticity to represent its product with confidence in the market. It currently holds the 6th place in the top cryptocurrencies in the world. Therefore, it shouldn’t be a surprise if the price value of Bitcoin reaches $30,000 USD this year.

With the new advancements like Bitcoin Latinum and open-source tools to mine Bitcoin, the reach of Bitcoin has been made closer to all the people in the world. Now it has been made possible for everyone to mine Bitcoin using their android device or any handheld device with a sufficient amount of hash power. There is no straight answer for the question, “whether Bitcoin can reach $30.000 USD this new year.”

The cryptocurrency market is highly susceptible to change every now and then. It is difficult to fathom whether the price will dip or go high in the upcoming months. Obviously, the price would reach $30,000 USD someday, probably in the nearest future but it would be too bold to say that it will reach within a month or two. Bitcoin may not be able to reach $30,000 USD this new year but surely, that is going to happen sooner or later.

We just like any other Bitcoin lovers are going to wait for that day to come to reality. To be honest, it doesn’t matter if it reaches that point so quickly or not. The point is that our Bitcoin investments are going to grow so well in the foreseeable future. Our investments are safe and that’s all that matters the most.