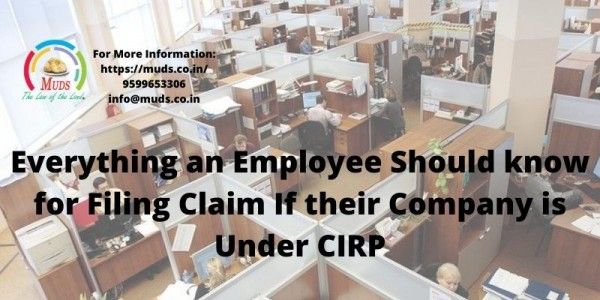 Employees often get dejected thinking if their company is facing insolvency or getting dissolved then they will just lose employment and won’t have any monetary support. But this is not the case as the employees can actually file a claim for their wages and thus, they do not need to worry about this problem.

Employees often get dejected thinking, if their company is facing insolvency or getting dissolved then they will just lose employment and won’t have any monetary support.  But this is not the case, as the employees can actually file a claim for their wages, and thus, they do not need to worry about this problem.  However, another issue faced by the employee is that they do not understand the difference between filing the claim in case their company is facing CIRP or is in the liquidation process.  In this blog, we will understand how the claim filing process should be differentiated between CIRP and the liquidation process through a few case laws.  Case laws have also been used in this blog to bring the judiciary’s view on such contradictions.

Difference between Claims for CIRP and Liquidation Process

The Necessity for Claims to be Different for CIRP and Liquidation

The claims filed by the workmen and employees have got to be differentiated as within the liquidation process because as per Section 53 of the Insolvency and Bankruptcy Act, 2016 (“IBC”) which provides for the order of priority during which the proceeds from the sale of liquidation assets is to be distributed which is as follows :

Section 53 of IBC is given below:

(1) Notwithstanding anything to the contrary contained in any law enacted by the Parliament or any State Legislature for the nonce effective, the proceeds from the sale of the liquidation assets shall be distributed within the following order of priority and within such period as could also be specified, namely: –

(a) the insolvency resolution process costs and therefore the liquidation costs paid in full.

(b) the subsequent debts which shall rank equally between and among the following:

(i) Workmen’s dues for the amount of twenty-four months preceding the liquidation commencement date; and

(c) wages and any unpaid dues owed to employees aside from workmen for the amount of twelve months preceding the liquidation commencement date;

What is the Issue with Differentiation in Claims?

How the claims filed for CIRP and Liquidation Process by employees should be different under IBC 2016?

The word 'employee' isn't defined within the IBC, however, the term ‘workman’ is defined under the provisions of Section 3(36) of the Code and has an equivalent meaning as assigned thereto within the Industrial Disputes Act, 1947.

The Workmen has been defined under Section 2 (s) of the Commercial Disputes Act, 1947.  The said definition is quoted below:

“Workman” is a person (including an apprentice) employed in an industry who does any manual, unskilled, skilled, technical, operational, clerical, or supervisory work for hire or reward, whether the terms of employment have been expressed or implied, and for the needs of any proceeding under this Act about an industrial dispute, includes any such one that has been dismissed, discharged, or retrenched about, or as a consequence of, that dispute, or whose dismissal, discharge or retrenchment has led thereto dispute, but doesn't include any such person.

(ii) who is used within the police service or as a politician or other employee of a prison; or

(iii) who is used mainly during a managerial or administrative capacity; or

(iv) who, being employed during a supervisory capacity, draws wages exceeding ten thousand rupees per exercises, either by the character of the duties attached to the office or because of the powers vested in him, functions mainly of a managerial nature”

Whether the services/business of the company debtor would come under the definition of Section 2(j) of the Commercial Dispute Act 1947?

Before answering the most issue, it's to be checked that whether company/corporate debtor would come under the ambit of Industry as defined under Section 2(j) of Commercial Dispute Act 1947?

The definition of Industry as defined under Section 2(j) of the Commercial Dispute Act 1947 is mentioned below:

“Industry” means any business, trade, undertaking, manufacture, or calling of employers and includes any calling, service, employment, handicraft, or industrial occupation or avocation of workmen.

The Hon’ble Supreme Court within the Bangalore Water System and Sewerage Board v. R. Rajappa elaborated upon the definition of Industry.  The term industry has been given a good scope and therefore the judgment overruled several earlier decisions.  The court held any activity is going to be industrial if it fulfills the 'triple test', as under:

Conclusion to the other Issue:

The word 'employee ' isn't defined within the IBC, 2016 (“Code”), however, the term ‘workman’ is defined under the provisions of Section 3(36) of the Code and has an equivalent meaning as assigned thereto within the Industrial Disputes Act, 1947.

The Workmen has been defined under Section 2(s) of Commercial Disputes Act, 1947 and therefore the same has been quoted above.

In the matter of Delta Jute & Industries Ltd. Staff Association and Ors. v. State of West Bengal and Ors (Calcutta High Court), it had been held that an individual working in purely managerial and/or supervisory capacity doesn't fall within the definition of workman under Industrial Dispute Act.  However, when an individual performs multifarious functions, the character of the most function performed by the person has got to be considered to work out if the person may be a “workman.”  The designation of an individual isn't a conclusive thing about determining the character of labor. albeit an individual is designated as a supervisor, the employer has got to prove that his work and his duties were as a supervisor.

Solutions to Main Issue Based on Case Laws

Employees are defined as:

There are various acts wherein the worker has been defined like under Section 2(f) of the workers' Provident Funds and Miscellaneous Provisions Act, 1952, Section 2 of the Payment of Wages Act, 1936, etc.  Since the definition of employee isn't mentioned within the IBC 2016, but the definition of workmen is mentioned, one could infer from this, that the intention of the legislature is,  if the employed person doesn’t fall into the ambit of the workmen, then he can be considered as an employee.

Workmen are defined as:

Therefore, to differentiate between the worker and workmen in the present scenario, the specified documents would be either an appointment letter or an offer letter (preferably the offer letter).  However, it can be observed above that only the designation of a person isn’t the only important factor but the roles and duties being performed by them are also important.  For this, one could ask from the erstwhile director of the company debtor a summary on what duties are being performed by the employed person supported designation.

With a clear understanding of the above terms in legal semantics, an employee will be able to understand the difference between filing a claim for CIRP and the liquidation process under IBC.

Choose the best thermos for coffee to Keep Your Day Warm and Refreshing
8693
Branding Yourself Through Social Media Engagement
7863
The benefits of bulk SMS that your business can hardly afford to ignore
7726
Redefine Your User-Centered Food And Beverage Boxes
6206
Leveraged Finance vs. Corporate Finance/Investment Banking
3816
Business and job opportunities in Qatar
2048
A Complete Guideline To Manufacturing And Designing Of “E-Liquid Packaging Uk”
1579
Learn How to Write an Editorial
1425
How much does it cost to develop an app like Zomoto for your on-demand food delivery app business?
1355
3 Things To Do Before Interviewing The Moving Company
1347
Jimmy Ocean Osorio - El mejor ejemplo de cómo debe ser un empresario
1243
How to hire Laravel Developers with excellence and experience?
1224