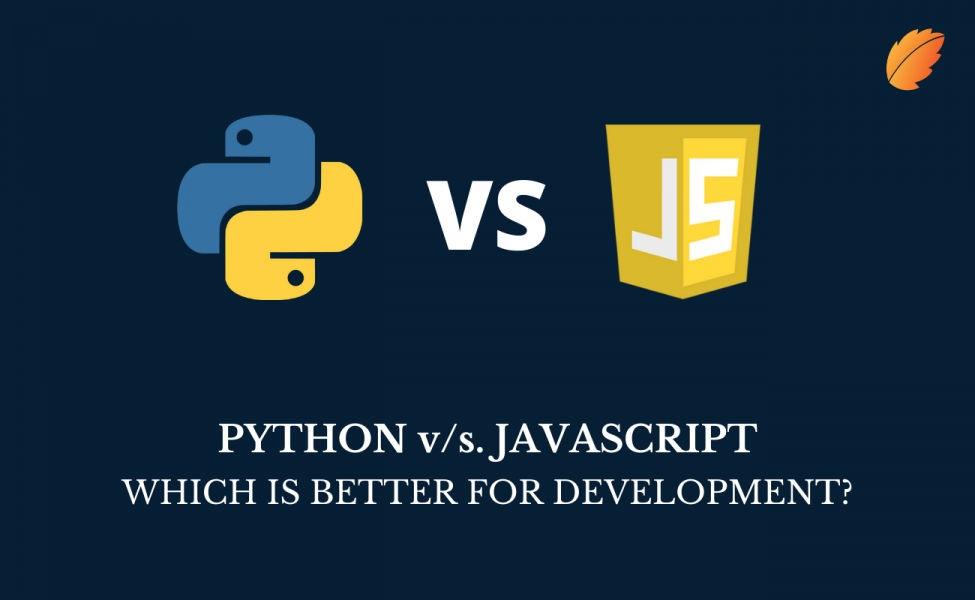 PYTHON v/s. JAVASCRIPT- WHICH IS BETTER FOR DEVELOPMENT?

If thorough web & mobile app development services are what you are looking for, do connect with the team at Consagous Technologies.

Taking the present scenario into context, Python and JavaScript are two very renowned object-oriented programming languages. As far as their behavior is concerned, there are a number of similarities, but also an equal number of differences in syntax, use cases, and even the programming approach.

Understandably, before we go into the differences, it is important to understand both languages in brief. It will help to portray a clear picture when we will further discuss the differences.

Python- A Language Growing in Prominence

Python is a pretty strongly written programming language that consists of dynamic semantics and an object-oriented approach. It’s a language that is intended to facilitate easy reading as well as implementation.

The biggest power of Python is its flexibility, through which programmers get the freedom to explore a range of programming variables to develop generic and complex programs.

From a number of programming paradigms, the ones supported by Python are as follows-

Thanks to its strong writing, Python is easy-to-understand and supports high-level syntax as well.

JS has been standardized as per the ECMAScript language guidelines, a standard that facilitates seamless operations of web pages on multiple web browsers. The dynamic functionality that JS provides is something not possible by using HTML and CSS for that matter.

The initial utility of JavaScript was for front-end development, but with time it also began to be used for back-end as well. Today, JavaScript is a language that offers full-stack development and, once coupled with Node.js, the combo can be used to create independent desktop apps as well.

As far as Python is concerned, the language depends on spaces at the beginning of a line, or indentation for defining code blocks. Lines are considered to be a part of the same code block if they are indented at the same level.

The objects in JavaScript have certain properties that can be composed of different attributes, which enables a programmer to define a certain property.

In the case of Python language though, there’s a descriptor protocol, that allows for the display of different behaviors when accessed as attributes of varying objects.

Both Python and JavaScript react differently to the occurrence of functional arguments.

In case a function gets called due to incorrect parameters, Python raises an exception then. To add to it, it also accepts some added parameters for passing syntax as well.

JavaScript doesn’t react over if a parameter gets raised with incorrect parameters or not. The reason is that JS gets an ‘undefined’ value if certain parameters are missing. Even if there are certain additional parameters, then they are taken up as special arguments.

Because JavaScript is a full-stack language, it is equally suitable for mobile app development as well.

On the other hand, Python is not native to the mobile development ecosystem, and both iOS and Android do not support it as an official programming language for their environments.

All in all, the differences between JavaScript and Python are not too many, other than a few mandatory ones that are understandable because they are different languages.

The choice of your programming language will depend on the kind of team you are looking for, and if there’s a specific language preference in your mind.

If thorough web & mobile app development services are what you are looking for, do connect with the team at Consagous Technologies. They are seasoned professionals in what they do, and creating amazing products for clients is something they have been doing for more than a decade.

Fix can’t log in To AOL Mail Problems | How To Fix
20864
New Materials will be the Focus in the Post-Moore Era
16162
How to Cancel the Automatic Renewal of the Avast Subscription
9274
How to fix PayPal Login Problems?
8930
How does a Portable Power Station Work?
5602
User Retention For Mobile Apps: A Strategic Approach To Win User Loyalty
2183
Your Startup Business Needs To Utilize The Efficiency Of FG-TRAN-SFP+SR Transceiver To Get Your Network Up And Running With No Interruption
2135
Guide to Login AT&T Email Account
1975
What is on the My Account Page?
1659
I Forgot My CorrLinks Password | Reset and Recover
1539
AOL Mail Can’t Sign In
1511
Understanding the benefits of obtaining the CompTIA certification
1495