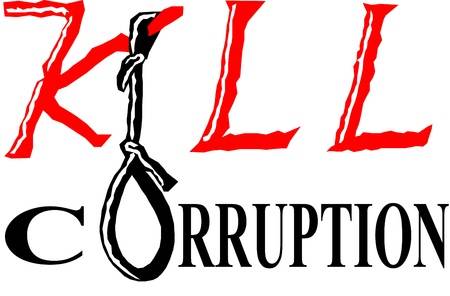 Definition of Corruption : Corruption is a combination of two words: Corrupt and conduct, which literally means corrupt conduct or bad behavior. In order to run the system of society or government systematically, some ideal rules of behavior have been made in public interest, through which ethics duty can be used. The violation of these ideals and rules for their selfishness ends is called corruption

Corruption is a matter of concern in today's world. Which is spread in some form, in every sphere, at some level, the only difference is that if it has been growing at some place, then it has reached the extreme limit somewhere. Today our country is also struggling with this problem or is struggling to avoid it.

Corruption is a combination of two words: Corrupt and conduct, which literally means corrupt conduct or bad behavior. In order to run the system of society or government systematically, some ideal rules of behavior have been made in public interest, through which ethics duty can be used. The violation of these ideals and rules for their selfishness ends is called corruption.

Corruption means that any work should be done against the rule or wrongfully for its benefit, whether that work is small or big. Either there is small shopkeeper or big enterprisers, they are selling their goods through tincture.  People often do corruption in the greed of terms, power and property, which is a big loss for the entire country. Corrupt people often cheat with the law of the country.

There are many types of corruption, such as given and taken bribe for their work, illegal construction,  favoritism instead of sex. No area has been untouched from corruption. Whether it is education, medicine, business or advocacy, whatever. In today's era, no work is done without paying any money. People are also able to enter government jobs even if they do not have a degree.

India is a very beautiful, religious and cultural country, but due to corruption, the image of the country is worse than other countries. Corruption is not only a human but also a major obstacle for the development of the entire country. It also has adverse impact on the economic, social and cultural status of the country.

Corruption is not done by the people or leaders who are in power, but ordinary people also do it, whether it is small or on a large scale. Everybody has the greed to get more and want to do their work as soon as, due to which they give bribe to the officers who are in power, which is the type of corruption. Today, people have assumed a belief that no work can be made without paying any money. This is what promotes corruption.

In order to get a job in a private company, they test your skills and ask for degree. There is no bribe transaction on here, because if you do not have the ability, then you will not get a job, this will harm the company's destiny. While in government jobs, people easily get their work done by paying some of government employees. They get a job, whether they have a degree or not.

In that, the employee makes a fake degree and gives him a job. Their greed was only of money that they got. He had no harm, but the country was damaged, he would continue to take money from the government every month without doing any work. Due to which the common man will face difficulties. But today, who thinks all of this. There are very few people who think about their country more than themselves.

There are little bit words on Corruption , I tried to explain. In Actual , It has become very big problem in our society, government ,organisation or other departments , everywhere. We should try to remove this big problem together that we will not give bribe to anyone and will not accept the bribe from anyone. only this type of determined thought can kill the corruption problem from our India. Otherwise it can destroy any country economy or whole country.

If you have any views about corruption, just give comments.