You’ve probably seen the classic image of a wild salmon swimming upstream—schools of feisty fish fighting the current for hours and hours but never really getting anywhere. Sound like anyone else you know?

If you’re an endurance athlete, this feeling may be all too familiar. You work and work for long periods of time but you don’t really feel like you’re making strides.

Where Does Astaxanthin Come From?

Don’t pity the wild salmon just yet. To improve your own endurance training, you may want to learn from this bright fish. Don’t worry if you’re not a swimmer; this tip is for all endurance athletes.

In this article, we’ll discuss the multi-faceted endurance benefits of supplementing with the naturally occurring carotenoid pigment found in salmon muscle, astaxanthin (AS-tuh-zan-thin).1

Where Does Astaxanthin Come From?

Oceans and rivers–in more ways than one–are partially responsible for astaxanthin in nature.

Astaxanthin is a natural carotenoid responsible for the vibrant hue of animals such as salmon, shrimp, crustaceans, etc.1 Carotenoids are the most diverse family of pigments found in nature, responsible for the shocking oranges, yellows, and pinks in fruits and plants.2

But animals themselves are not able to synthesize these pigments; instead, their diets supplement them.2 Consider beta carotene from carrots. Were you ever told that eating too many carrots could turn your skin orange from the high level of beta carotene? It sounds like an urban legend, but it’s true.3 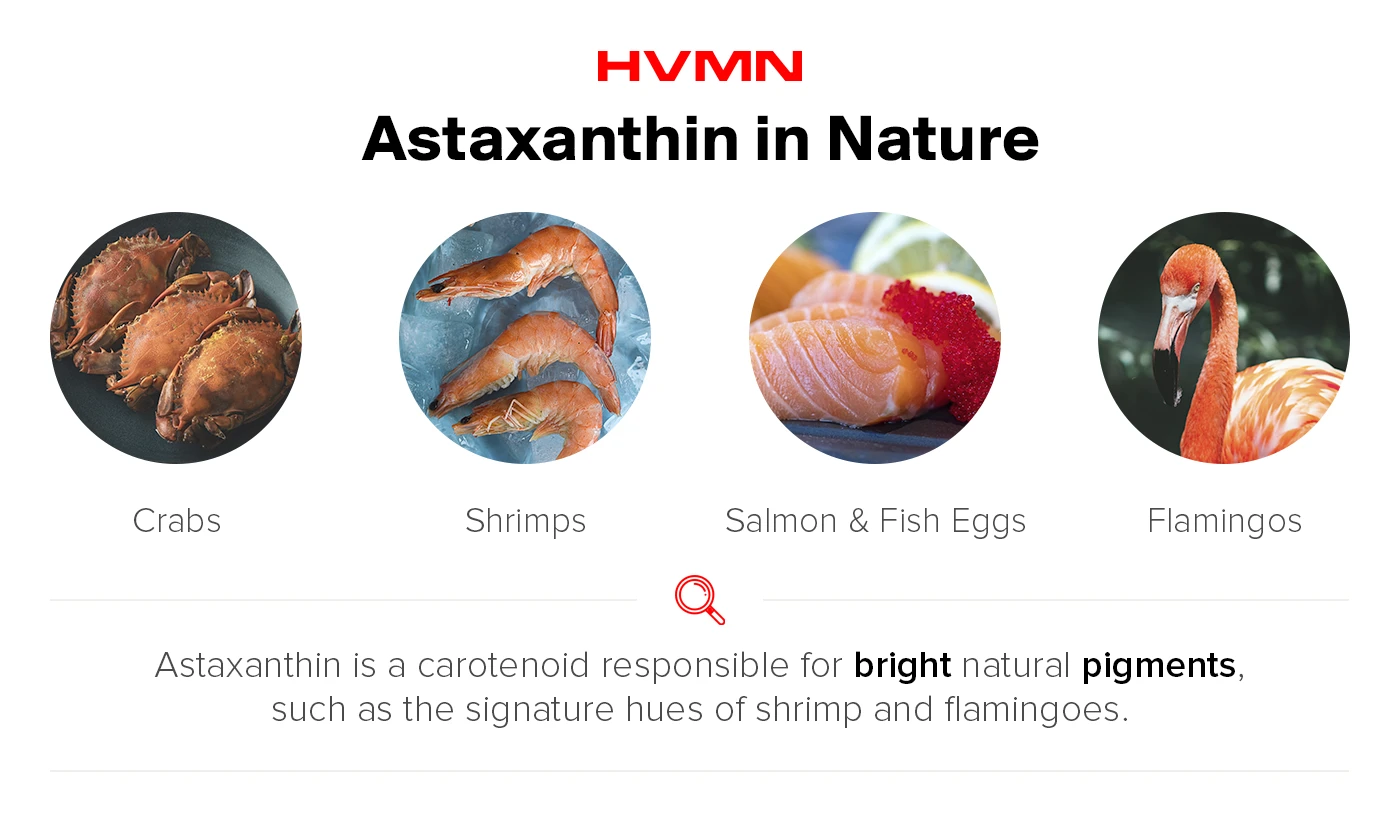 Remember that animals cannot synthesize their own astaxanthin, and they will need to source it from somewhere. And so do you. The U.S. Food and Drug Administration has only approved one natural source of astaxanthin for human consumption that can be taken as a dietary supplement: Haematococcus pluvialis, a microalgae.1

That’s right, athletes. If you want to be on top, you have to be a bottom feeder.

The Haematococcus pluvialis algae is the most concentrated natural form of astaxanthin.1Even if you’re tempted to get your fill from eating tons of wild salmon, it may be easier—not to mention cheaper—to go straight to the source.

We’ve chosen to focus on Haematococcus pluvialis as the main form of natural astaxanthin throughout this piece because it contains the highest concentration of natural astaxanthin (up to a whopping 3% of its dry biomass). However, there are two other natural sources commercially available: crustacean byproducts and a red yeast Phaffia rhodozyma. There’s also a synthetic astaxanthin source used to give products like fish food and food coloring a bright red color.4

Now that we’ve discussed what natural astaxanthin is and where it comes from, let’s dive into why you may want to add it to your daily routine to assist with your endurance training.

Exercise induces oxidative stress through the production of free radicals in the cells, especially if you’re an endurance athlete.1 Free radicals are molecules with an unpaired electron that are very reactive and unstable. Common triggers include things like cigarette smoke, environmental pollutants, and yes, even exercise.

The body wants to keep these free radicals in check because they can damage our DNA, tissues, and cell structures by stealing electrons from lipids in our cell membranes (also known as lipid peroxidation). Free radicals also contribute to diseases such as diabetes, cancer, and heart disease.5 Antioxidants are documented to not only prevent the formation of free radicals but also to scavenge them once they’re already moving through your system.5 Even if you're not an endurance athlete, you can give your defenses a helping hand by ensuring you get your daily dose of antioxidants.

Several studies demonstrate that astaxanthin is a powerful antioxidant that combats oxidative stress.1,6,7 But let’s get an idea of just how powerful that antioxidant activity is. None of your fan favorite antioxidants–beta carotene, Vitamins C and E, and zinc–are as effective at reducing oxidative stress when compared to natural astaxanthin. No big deal, right? How much of a difference could it possibly be? Have a seat.

In terms of eliminating a singlet oxygen, natural astaxanthin proved to be:

Natural astaxanthin is big leagues. And the stakes are already high (reminder: we're talking about antioxidant properties for reducing the risk of diabetes, cancer, and heart disease). No need to swap out your orange for astaxanthin supplementation, though. They can work together quite nicely. 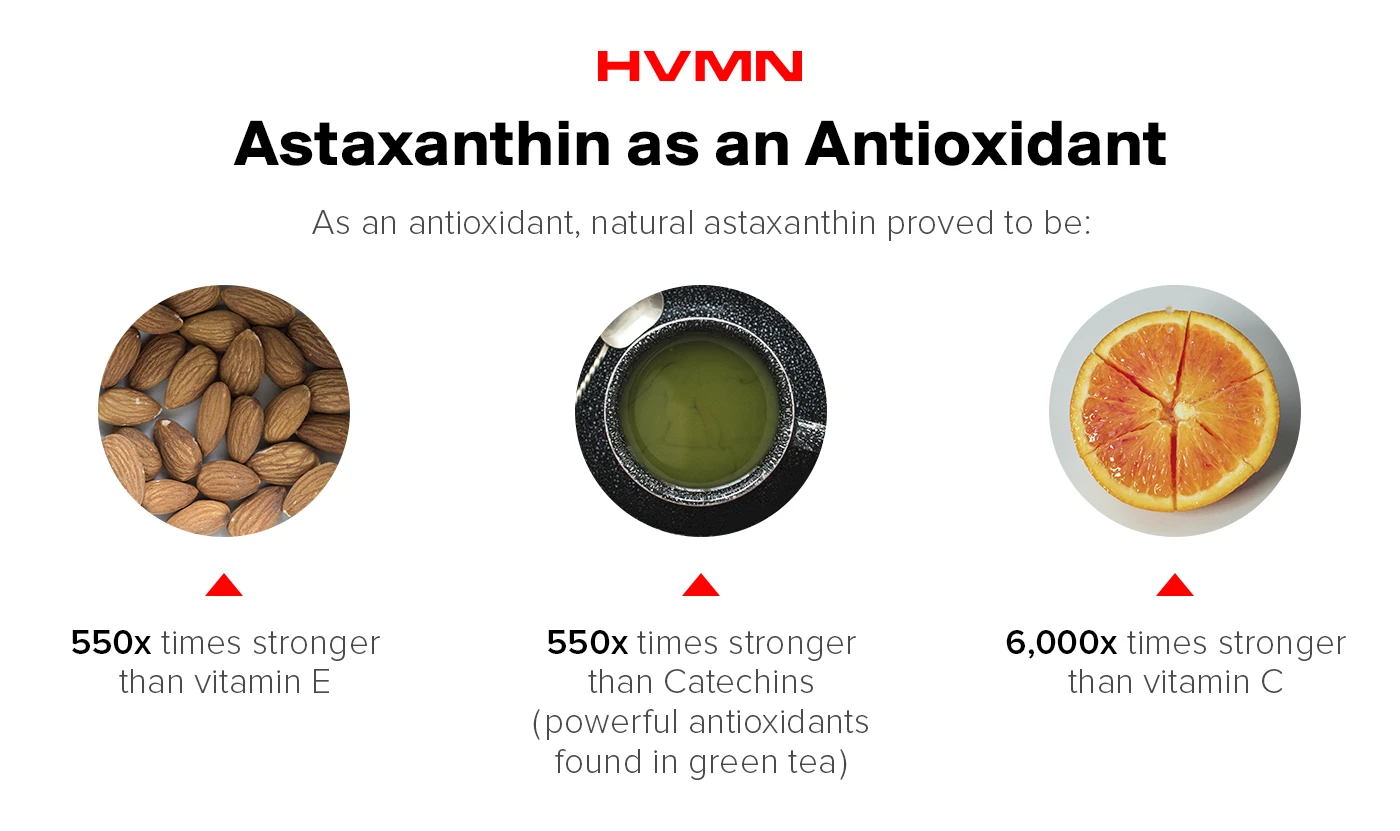 Vitamin C isn’t sitting there, orange with envy, wondering what astaxanthin has that it doesn’t have. But maybe it should. Astaxanthin’s potency comes from its unique ability to span the cell membrane, providing protection for both the fat-soluble and water-soluble parts. It can also effectively target the cardiac and skeletal muscles and breach the blood-brain and blood-retinal barriers to protect the brain and eyes.1 Translation? Natural astaxanthin is the powerful antioxidant equivalent of a tall person in the body; it can reach just about anything.

Astaxanthin’s reach could help you get a grip on your training, too. Remember one thing that stimulates the production of free radicals in the body is exercise. But that doesn’t mean you should stop exercising for fear of muscle damage. On the contrary, your body can adjust to the production of free radicals by adapting on a cellular level. The trick is getting the balance right. Overly exhaust yourself time and time again, and you could cause tissue or muscle damage from an excess of free radicals. But work hard enough to regulate the expression of cell-defending enzymes in the face of free radicals (and edge it along with natural astaxanthin), and your body will learn to cope with the oxidative stress of exercise.8

If creating free radicals wasn’t enough, exercise can also cause inflammation, and it’s important to manage this inflammation to help you maintain the quality and quantity of your training. Like oxidative stress, your body will adjust over time. But you can always give it a nudge in the right direction.

We talked about how astaxanthin was shown to outcompete other powerful antioxidants in removing free radicals. But this potent pluvialis also overshadowed its competitors in the anti-inflammatory field.1,7 Reducing inflammation can assist with injuries from overuse (which leads many athletes to cross training) as well as pain in the joints (like arthritis), tendons, and muscles. You may have used an anti-inflammatory medication to cope with arthritis pain or general soreness, but you probably haven’t used natural astaxanthin.1

Don’t count it out. Astaxanthin works on multiple inflammatory pathways albeit less powerfully than a targeted anti-inflammatory drug. It’s the internal equivalent of a gentle holistic healing approach for the body.1

Widely available anti-inflammatory medications can compete with astaxanthin supplementation in reducing inflammation. But there’s a catch: the side effects.

Multiple safety studies and consumer use reports show no side effects of astaxanthin supplementation.1 The highest daily dose resulted in a slight red color in the skin (still nothing compared to beta-carotene). Consider this list the next time you reach for your trusty bottle of pain reliever after a hard day of training.

Let’s go back to training basics for a minute. During exercise, your glycogen stores (i.e. your carbohydrates) are depleted first. Once they’re used up, you’ll hit that familiar wall, thanks to the buildup of lactic acid in your muscles. But utilizing lipids (i.e. fatty acids) as an energy source spares the glycogen stores and continuously fuels a workout through larger energy reserves.9,6 And, you guessed it; consuming astaxanthin triggers increased lipid usage during exercise.9

Utilizing these fatty acids early on allows the glycogen to be stored away for later use, which means it can help delay the inevitable onset of fatigue.9,6

Human clinical trials have shown increased endurance outputs after a six-week period of supplementing with astaxanthin because the astaxanthin allows you to tap into those lipid stores more effectively.9,6 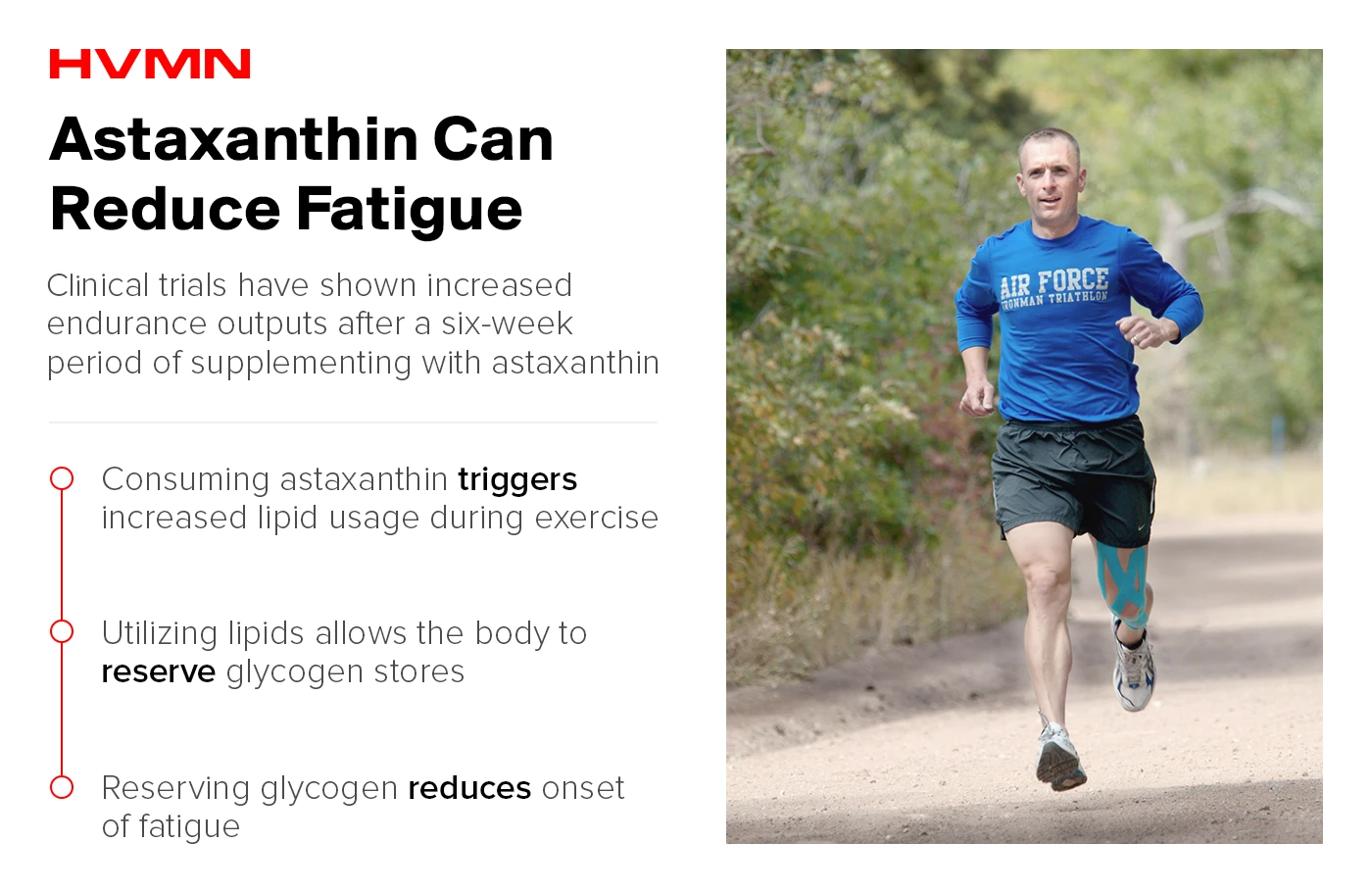 If you’re ready to add astaxanthin supplementation to your daily routine, let’s talk dosage and safety. Keep in mind that you should always follow the medical advice of your healthcare professional before taking any new dietary supplements.

If you want to get ahold of astaxanthin, HVMN has you covered with Kado: our daily Omega-3 healthkit, which includes 2mg of astaxanthin.

Kado is a brain and body protector boasting essential vitamins and Omega-3s for improving your mood and heart health.

The daily recommended dosage of Haematococcus pluvialis is between 2 -12 mg per day with no negative side effects reported up to 20 mg a day (aside from that pesky red color in your skin). 4

The list of benefits from supplementing with astaxanthin runs long. If this were a report card, it would get straight A’s across the board.

Whether you’re an athlete looking to push your workouts without incurring oxidative damage or just someone seeking a natural product that's an alternative to over-the-counter anti-inflammatories, astaxanthin supplementation may be beneficial for your daily life.

Next time you see a salmon, admire its true colors, and thank the fish for sharing its strength and endurance secrets…even if it couldn’t escape becoming your dinner.

Learn from our experts. Subscribe, and we'll provide you with the latest science on performance nutrition.

4005
What is Prebiotic Skincare?