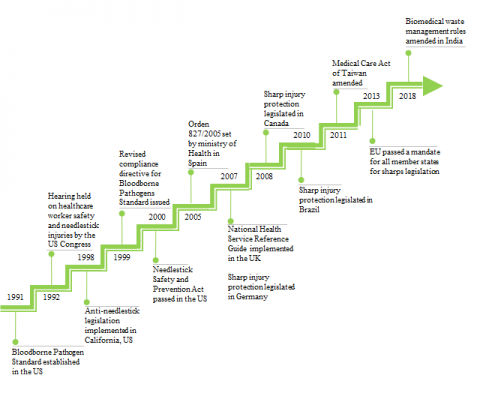 Healthcare professionals are constantly at risk of acquiring serious infections because of needlestick injuries. A needlestick injury occurs when sharps contaminated with a patient’s bodily fluids are accidently introduced in blood or mucous system of healthcare professionals. It can occur while drawing blood, administering intravenous drugs, disposing of needles, handling medical waste and other routine procedures within the healthcare environment. A needlestick injury can impact anyone who comes in contact with a non-sterile, unprotected, or a contaminated needle. This can lead to transmission of hepatitis B virus (HBV), hepatitis C virus (HCV) and human immunodeficiency virus (HIV) and other infectious agents.

The estimated cost of treatment of a single needlestick injury ranges from USD 500 to USD 4,000 in the US. With 236,000 cases of needlestick injuries, the economic burden in the US is estimated to be USD 118 million to USD 591 million. It is worth highlighting that this cost may increase depending upon the seriousness of the case. Further, as per the American Hospital Association, one serious case of pathogen based infectious disease can cost up to USD 1 million or even more than this depending upon the expenditures on the testing, follow up tests, lost time and disability payments.

Figure given below shows the evolution of healthcare safety legislations across the various regions of the world.

In compliance with needlestick injuries prevention laws and legislations, prefilled syringes now come with safety devices to reduce the risk of such injuries. These safety devices are of two types:

It is now mandatory in almost all international healthcare markets to use safety-engineered devices to protect healthcare workers from risk of getting exposed to contaminated needles and prevent needlestick injuries.

Currently, most of the prefilled syringes do not have integrated safety features. Traditionally, prefilled syringe manufacturers sourced needle guard devices from elastomer components manufacturers. Examples of some of the add-on safety device manufacturers include Becton Dickinson, West Pharmaceutical, Vetter Pharma, Tip-Top, Schreiner Medipharm and Credence Medsystems. The safety devices can be passively or manually activated upon completion of injection. These ancillary devices slide an external plastic sheath over the entire prefilled syringe or have a needle retraction system that upon activation, retracts the needle back into the barrel to protect the user from needlestick. Integration with a standard and approved staked-in or luer connection syringe and syringe components reduces the incompatibility risk for the drug formulation, as well as the development effort and risk of the drug manufacturers. This approach can significantly reduce the timeline for development and regulatory approval of prefilled syringes.

On the other hand, the disadvantage of using these clip-on safety devices is that they are often much larger in size than the syringe itself increasing the overall packaging and shipping costs. The ancillary safety products can increase pharmaceutical packaging, transport and disposal volumes by up to 70%.

Why are CBD Packaging Boxes necessary?
1599
What kinds of Benefits of Credit Repair Software?
1442
What are the features of Private Limited Company Registration?
1032
Outsourced vs In-house Software Testing Team - What To Choose?
912
Are Exotic Vape Carts Real and How Can You Spot If They’re Fake?
909
Wound & Tissue Care Market Size, Share, Growth & Trend Analysis Report By Type (Hydrocolloids, Adhesives, Pressure Relief, Silver Dressings, Other), By End use (Skin Ulcer, Burns, Surgery), By Regions
844
Prefilled syringes Market Size, Share, Growth, Analysis and Forecast to 2030
805
Allegiant Airlines Low Fare Calendar +1-888-526-9336
796
Why Eco Friendly Boxes are Rapidly Becoming a Norm and How to Benefit from it?
792
Dynamics SharePoint functionalities and Their Partners’ Contribution
757
What Are The Things You Can Expect From Your On-Demand App Developers?
734
Take Advantage of the VMware VCP-DCV 2020 Study Guide
730