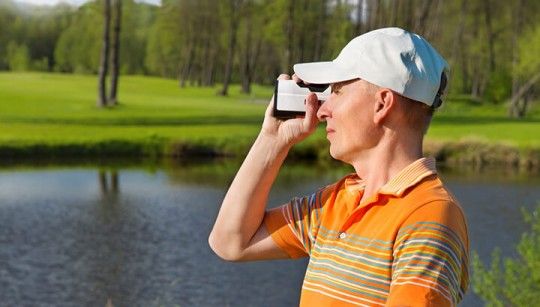 YOUR MANUAL GUIDE ON RANGEFINDER:

In the 20th century, no one in their wildest dreams thought that one day, Rangefinder which is strictly used for military purposes can have such a wide array of uses in everyday life. Nowadays, whether you are a golf player, Hunter, Archer, Photographer or a forestry expert, You will need a rangefinder for various purposes.

If you belong to any of the above groups and wants your hands on a rangefinder that suits you the best, then this article is for you. After extensive research, We have compiled data which will give you a better understanding of range finders.

It is mostly used for surveying and navigation to give you a better outlook on ground conditions. It also enhances the aim of hunters whether you are a gun hunter or good old bowhunter.

Rangefinders are classified into four types related to the type of technology used in them. We have explained each one of them below.

Laser rangefinders are the most widely used type of range finder. They emit Laser beams in large quantities that travel with the speed of light and come back after hitting the target object. Then the distance is calculated based on the time taken by the beam to come back.

A large number of beams are emitted just for the purpose of enhancing the accuracy. Laserfinders can be used for different functions and they are built to perform specific functions too.

The laser beam is narrow, but still, its divergence in the air due to air bubbles which act as mirrors can cause range errors. For example, the laser beam may not be able to give an accurate range if the object is under the bushes or trees. This is because some beams might hit the tree before hitting the object and return deceiving the range finder.

GPS rangefinders are mostly used in golf. They have GPS systems installed which shows the distance to any specific hole. But for it to function properly, you just need to scale and screen the golf course and installed into the system beforehand. Most of GPS rangefinders come with hundreds of built-in presets of golf courses.

OPTICAL RANGEFINDERS:
Every rangefinder out there evolved from the optical rangefinders. They were used in the last century for just military purposes. Now you can only find them in museums. It consists of a series of lenses that capture two images, Which were then matched for accurate distance. This process was time-consuming as optical rangefinders were mechanical.

Ultrasonic range finder, as its names states, uses ultrasonic waves for the measurement of the distance. Its functionality exactly replicates Laser rangefinders except they use ultrasonic waves instead of Laser beams.

But they aren’t as effective as laser rangefinders. The ultrasonic waves can be scattered due to the wide wave stream which compromises the accuracy. The wind also affects their performance. That’s the reason why Ultrasonic rangefinders must be used in quiet and calm places.

Ultrasonic rangefinders have many technical inadequacies that make them ineffective in most of the cases. They aren’t that much popular and arent widely used.

A rangefinder doesn’t aid in aiming. It just helps you to measure the distance between you and the game for you to comprehend how much time will be required for your bullet or arrow to reach a certain point. You can anticipate the trajectory of your prey and shoot the bullet or arrow at the right time.

Laser rangefinders are mostly used for hunting and some hunters even map the whole area before the hunting season kicks off to reduce the reaction time to a minimum. Your prey most likely won’t stand still for a long time. So a laser rangefinder with the feature of continuous scanning might come in handy.

APPLICATION FOR GOLF PLAYERS:
Golf players have two options of laser finders to choose from. Whether they can use the GPS rangefinder which is easy to operate or can depend on laser ones which offer a wide variety of applications.

A rangefinder can measure the distance to any whole with accuracy up to 1 yard. If you want to top the chart of a golf game, a range finder is must for you.

APPLICATION FOR PHOTOGRAPHERS:
Laserfinders are used for long-distance photography as it clears the otherwise pixelated image. It gives the feeling of being right next to the object which you are taking picture of. Rangefinders are best suited for static photography but when it comes to street photography, You can lose the moment before you can click the picture.

FORESTRY RANGEFINDER:
Ranging is utilised by forestry experts to map and survey the forest with ease. Forestry rangefinders are a little bit different as they are designed to avoid leaves for better accuracy. They can also provide the distance between two points as well as the height and volume of trees.

Rangefinders are extremely diversified and different departments require different types of rangefinders. The purpose of the article was to grant you a better outlook on how rangefinders fit in different arrays of our life. I hope by now, You have chosen a rangefinder that best suits your field of interest.