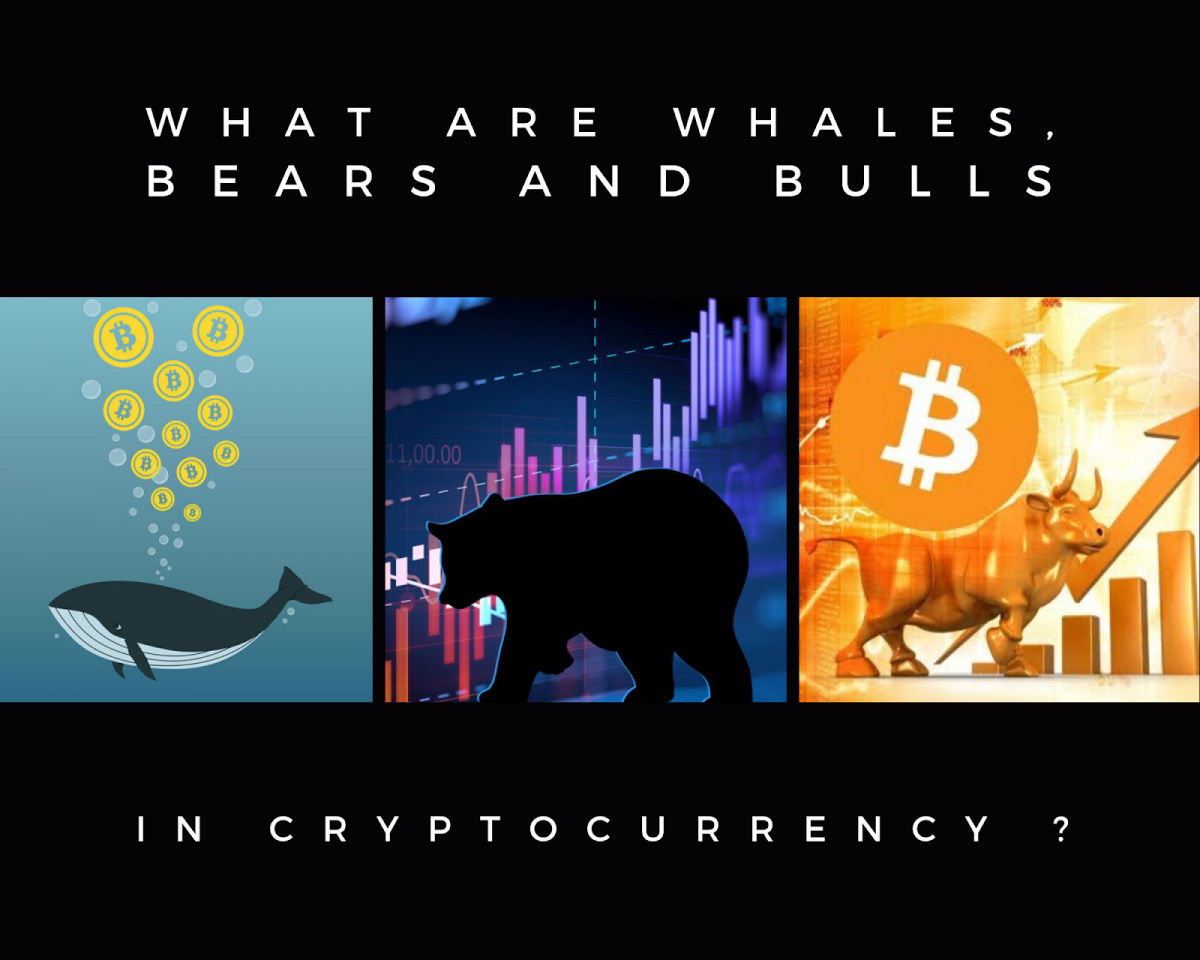 What Are The Whales, Bears, And Bulls In Cryptocurrency?

Today, cryptocurrency has become a worldwide phenomenon because of the success of Bitcoin. The famous digital currency, however, made a slow start in its initial days, but soon proved its worth in the new financial world. People became so convinced that they started investing in Bitcoin which made them richer. However, besides Bitcoin, there are other very important elements in the cryptocurrency world, which you must be knowing. These are whales, bears, and bulls in cryptocurrency.

Today, cryptocurrency has become a worldwide phenomenon because of the success of Bitcoin. The famous digital currency, however, made a slow start in its initial days, but soon proved its worth in the new financial world. People became so convinced that they started investing in Bitcoin which made them richer. However, besides Bitcoin, there are other very important elements in the cryptocurrency world, which you must be knowing. These are whales, bears, and bulls in cryptocurrency. Now it might sound weird for you as to when did animal kingdom became a part of the crypto world.

Well, it has nothing to do with the animals which you see in marine or forest. These are rather terms that are used in cryptocurrency to indicate something. Also, you must be familiar with bears and bulls in the stock market. If yes, then you can understand what does it mean. But the whale is something which you might have not heard before. So let us explore these terms and know what they really mean.

Among the strong animals the whales, bears, and bulls in cryptocurrency, let us begin with the bigger one, the whales. Here we are not referring to the massive mammal that rules the aquatic life but to the large players who have the power to hold digital currencies and manipulate the prices as per their own choice. Akin to dreaded and fearsome mammals like whales, these large players share similar qualities, as they rule around crypto space and make unexpected changes with every activity. Now there must be the question in your mind as to who are these large players which are termed as whales.

Identified by their public addresses, these are exchanges or even anonymous traders. The reason that makes these big players creating the problem is their own way of diverting the market and bringing change in the price. It, therefore, becomes uneasy for the traders who are unable to figure out how and where to trade.

After getting a brief understanding of the whales, now lets us understand about bears and bulls in cryptocurrency. A crypto enthusiast is always inquisitive about knowing how can I invest in Bitcoin, especially, if new as an investor. But one must careful during the bear market. Just like the stock market, the bear represents downfall or caution, similarly, in the context of cryptocurrency also, the meaning almost remains the same. Instead of buying, traders opt to sell more. The downturn of Bitcoin during 2018 is the best example that can be quoted for the bear market. In terms of cryptocurrency, the bear market is the indicator of the downward movement of the cryptocurrency price.

A bull market is an antonym of the bear market. It shows the upward market trend, which truly indicates positivity and hope for an investor. The best example of the cryptocurrency bull market can be reflected during the year 2017 when Bitcoin made a tremendous hit at $20K.

The terms whales, bears, and bulls in cryptocurrency indicate according to the characteristics of these mighty species. Where whale is a bigger mammal who rules the aquatic life with domination, similarly, bears are known for hitting their opponent downward and bulls opposite to them hits upwards. In that way, their action resembles large players, downward and upward in the crypto market.

After getting a brief knowledge about the whales, bears, and bulls in cryptocurrency, note that all these entities run parallel together. It is because if whenever you chose to deal with cryptocurrency as a part of your career, then these terms will constantly become part of your business. There is a lot more to learn beyond Bitcoin. Although, everything will revolve around it, still, it becomes important to be abreast of each and every term that is related to cryptocurrency. Be it any established firm or startup company dealing in cryptocurrencies, it is essential to know about the latest developments and of course these terms which play a bigger role in the crypto market.

What Are the Best Apps to Download Movies for Free?
1051
A Demand planning Software Solution
984
Usual Practices Of Money Laundering In Cryptocurrency
829
What Human Resource Management Tools Are Necessary for a Business?
771
Are You Considering Becoming a Cybersecurity Engineer?
721
Vuoi spostare i tuoi file PST nel formato MBOX ad alta velocità?
590
How Mobile Apps Transform The Healthcare Industry
568
Which are the Top Mobile App Development Companies in New York?
563
How Can Venture Capital Software Assist You?
540
Here Are The Solutions To Fix Canon Printer Is Offline Mac
533
How Top Image Annotation Companies are providing service at Lowest Price?
530
What are the Training Data Sets Used to Train the AI Model for Self Driving Cars?
527