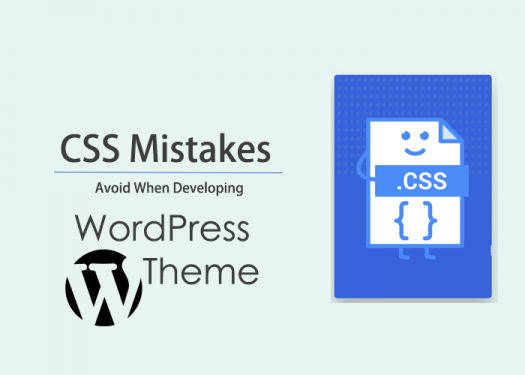 8 CSS Mistakes to Avoid When Developing a WordPress Theme

Listed here are some CSS mistakes that both novice and professional WordPress developers make, along with surefire ways to avoid and resolve them.

Even though CSS is one of the simplest web languages, many developers still commit some common CSS mistakes during WordPress theme customization or development. Unfortunately, web browsers don't understand these errors and consequently incorrectly render theme layout.

Since these mistakes may lead to a broken layout and a poor user experience, it's much better to avoid them. In this blog post, we'll look at some CSS mistakes that both novice and professional WordPress developers make during theme development, along with surefire ways to deal with them.

#Ignoring the Basic Rules for Selectors

Whether you're a beginner or seasoned WordPress professional, there are some important ground rules for Selectors you must follow while writing or modifying the CSS for a WordPress theme. For example, every selector (unless it is an HTML TAG) needs to be identified as an ID or CLASS. Plus, you should define the selector in the format given below:

The most important thing to note here is that all the little details, including braces, colon, and semicolon, must be included in your CSS selectors. Otherwise, either nothing will happen, or you'll get a shabby layout.

One of the most common CSS mistakes that most designers make while customizing a WordPress theme is placing all their designs in the wrong CSS selector. Sometimes, instead of putting their designs in #context-text, designers tend to put them in #content. Consequently, they often are unable to view the tweaks made to the layout.

Many WordPress developers have a habit of assigning more than one piece of information to a single selector, which leads to various CSS conflicts. This is when multiple selectors start loading simultaneously and confuse the CSS which one should be loaded first. This scenario usually occurs when you try to use your own CSS stylesheet over a new one. So before assigning any reference to a selector, make sure the selector is not assigned to any other reference.

#Not Paying Attention to the Browser Bugs

No matter how much effort you've put into making your WordPress theme beautiful, viewing it in a different browser may completely screw up its elegant design. As various browsers render web pages differently, you must follow all the CSS Coding Standards when writing CSS for your WordPress theme. Below are some most common CSS issues you may face during custom WordPress theme development:

To avoid these issues, you need to write proper CSS with browser-compatibility parameters in mind. To learn how to deal with browser bugs, check out this guide.

When it comes to the tag, most WordPress developers fail to style it properly. A simple solution to this problem is to use a different background color, add specific margins and utilize a non-regular font. For instance, take a look at this example:

Doing so will enhance your WordPress theme's look, as using an eye-catching image for the background will make your design more visually appealing.

#Implementing a Responsive Layout without Setting a Max-Width

While the responsive layout is a great way to make your WordPress theme look and function well, you may face readability problems on larger screens if you have not set the appropriate maximum width in a responsive layout. To prevent elements from becoming larger on big screens, use the max-width property in a responsive design.

Another crucial mistake committed by most WordPress theme developers is Code Redundancy, which refers to writing repetitive code in the CSS stylesheet. Violating the DRY (Don't Repeat Yourself) principle not only wastes a lot of your time and efforts but also may make your theme function very slowly. Let's take a look at the following lines of code:

As you can see in the code above, "font-weight: bold" has been repeated twice. To avoid redundancy, you can group the above lines as follows:

Be it content writing or coding, grammar is equally important in both cases. Spelling important terms incorrectly leads to unwanted errors, and therefore, you must pay special attention to whatever you're writing in your CSS stylesheet. For example, using 'pc' instead of 'px' or 'lefft' in place of 'left' will not produce the desired results. Since it's quite common to make typos, you should use a CSS Validator to quickly catch a wide range of spelling mistakes you've made in your CSS stylesheet.

Top 8 Ways to Optimize Your WordPress Site for Local SEO
776
The Benefits of Enabling WordPress Multisite Network
711
Take your business to the next level by developing an app like Uber for plumbers.
485
10 Top notch reasons to hire a professional WordPress development service provider
469
Benefits of Choosing WordPress Development Services
466
Why Would You Create a Website with WordPress?
456
How to find that you need to hire Wordpress developers
435
Best Practices to Speed up WordPress Website Performance in 2021
413
WordPress vs Static HTML – Which one is better for your website?
360
The Benefits of PSD to WordPress Services
336
Surprising Features of WordPress You Never Knew Exist
335
Preferences of WordPress Development Services
331