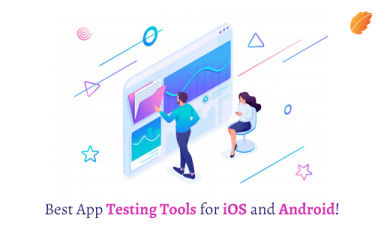 Mobile app testing is a Software testing and quality assurance process in which the developed mobile apps are tested for their usability, functionality, and consistency. This is to assure the quality before these apps are released into the app marketplaces like AppStore and PlayStore. Applications are tested at different levels which increases their efficiency on all fronts.

Today, smartphone users install any application based on its review and ratings, which is directly proportional to the performance of the app. This has made mobile apps testing and software testing and quality assurance services very important.

Now that we have learned briefly about the concept of mobile apps testing and its importance, let’s know about the various tools that make such kind of testing possible.

An open-source tool for testing a wide range of Android and iOS applications. With this software, developers can also test native apps written in Android and iOS SDKs, hybrid apps containing a basic web view, and mobile web apps that can be accessed through mobile-based browsers.

Appium aims at automation in the testing of apps without any modification and is a full-on solution for automated testing, but it is quite inconvenient because of its complex UI. Appium uses a WebDriver protocol for performing tests and supports C#, Ruby, Java, and other languages that belong to the WebDriver library.

Another open-source software quality assurance and a testing tool is Monkey Talk which is used to test both Android and iOS apps. Like Appium, Monkey Talk also automates functional testing. This software is quite simple to set-up and easy-to-learn as it doesn’t require deep knowledge of programming and technical scripting. The scripts of Monkey Talk are very simple and understandable.

From performing a little smoke test to tough data-driven tests, Monkey Talk is capable of handling everything. The tool consists of three different segments - the scripts, the operator, and the IDE. The testing engineers can also create XML and HTML reports using this tool. Likewise, it also catches screen capture when an error or failure occurs.

Monkey Talk supports emulators, tethered devices, and network devices. It also has inbuilt support for Jenkins and Hudson, which fulfills the purpose of continuous integration.

A mobile device cloud platform that provides access to devices to perform automated and manual tests on web, hybrid, and native iOS as well as Android apps. It gives users full control of the real-time mobile devices during the process of manual testing with support for multi-touch gestures.

Kobiton provides a seamless experience to the testing engineers by furnishing the testing-process and therefore it markets itself as an experience platform and not as an app testing platform. Kobiton lets access to the latest devices via the cloud-labs to perform more efficient testing and that too without script modifications.

Kobiton automatically generates commands, activity logs, metadata, and screenshots that help in faster identification of issues. It also includes support for Appium as it is built on top of the Appium open-source framework.

EggPlant is a part of the Digital Automation Intelligence Tool and allows dynamic testing from the user’s viewpoint. It is quite much useful for software quality assurance, User Interface Automation, Mobile Testing, Web Testing, and Image-Based Testing. This tool allows testing a wide range of iOS and Android apps, including mobile and web-based apps.

This tool has one script for all platforms and devices, with some additional features of Full device code. While running tests through this tool, almost everything that appears on the screen can be tested.

EggPlant is a visual testing tool and therefore it doesn’t require testing engineers to know iOS and Android messages. This makes it a user-friendly tool for writing automated test scripts for mobile applications.

This tool empowers developers and testing engineers to easily test their apps and analyze the performance to avoid any critical issues or bugs from going live. Apptim measures the performance of iOS and Android applications while running them on real mobile devices.

After every test session, this tool produces a record of available bugs and overall performance metrics that you may find during the test. You can also track and publish bugs directly with this tool.

Apptim’s UI is intuitive and easy to use. Additionally, on the website, you get to see the detailed documentation that will be helpful to you during your initial steps with the tool and you get support available at every step of the way.

Several applications are making their way into the app marketplace every day. And many apps are also being taken down daily. So, if you are not familiar with appropriate software quality assurance techniques, the absolute best option is to outsource your application.